Salvete Omnes,
so it is March - a brand new month -  and we are back to Cpt. M. Horace Hayes' books and late XIX  century British approach to riding horses and their training and management.
I like to read and learn or even ponder about the ideas collected within his writings, with the hindsight that Hayes was a true example of XIX century horseman, with their vast experiences, practices and not  a few limitations - so today I will invite you to take a closer look at this book -  Illustrated Horse Breaking.

I selected these fragments from the text - the full text can be found on the Archive world library. 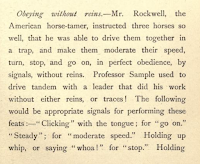 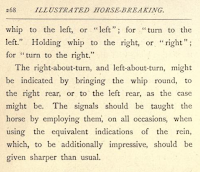 Necessity for obtaining control over the Horse.
In order to fulfil the necessary conditions of safety for himself, the breaker should be able, by the system under which he works to quote the words of that admirable horse-master, Professor Sample to make the animal rideable and driveable before he is either ridden or driven. The breaker who employs the ordinary methods, is not alone exposed to danger when mounting, or even driving his pupils' for the first few times; but also in the preliminary handling, unless, indeed, in the case of young foals. The advice to go boldly up to the horse and show him that you are not afraid of him, so freely tendered on such occasions, should be treated by its recipient as a piece of "cheap swagger," or the outcome of pretentious ignorance; for, even granted that such a demeanour would efficiently soothe a terrified animal, or cow a treacherously-disposed one suppositions that are altogether absurd such counsel would in no way supply the necessary foolhardiness for such an undertaking. My advice to either amateur or professional is, never to give a horse a chance of doing wrong; so, in order to be consistent after having said this, I shall endeavour to describe a method by which any horse, unsecured, say, in a yard or loose box, can be brought under complete control with, practically speaking, no risk to the operator.
On the nature of the coercion to be applied to unruly Horses.
The only risk run in enforcing the obedience which it is absolutely necessary to exact from unruly horses, is that of spoiling the animal's pluck and spirit a contingency that can be incurred only when the fractiousness arises from "nervousness," or from want of comprehension; for what we term pluck and spirit in the horse should have no taint of stubbornness. The coercion employed should, naturally, be limited to what would be sufficient to overcome the wilfulness; for we should never employ a general effect, when a particular one will answer our purpose. Thus, suppose we had a high-couraged, generous animal, that had been made difficult to mount by a bad. rider, on various occasions, prodding the horse in the side with his toe, when attempting to get into the saddle, we might get control over the animal by Pratt's twitch (see page 113), or by tying him head and tail, and then prove to him that we would not touch him with our toe, when mounting. The Rareyfying of such an animal for this or any similar fault, would be injudicious in the extreme ; as it would, almost to a certainty, injuriously affect one of his most valuable qualities, namely, his pluck. As a sulky animal has little or no pluck to lose ; we may well content ourselves in gaining his obedience without troubling ourselves much about any possible deterioration of his courage. 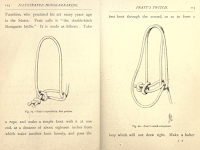 Breaking by kindness alone.
While fully admiring the kindness of heart of those enthusiasts who regard a horse as a friend to be won by affection, I must say that the better plan for making him a useful member of society, is to treat him as a servant who has to be taught his work, and from whom implicit obedience has to be demanded. Until he does his work honestly and well, the less petting he gets the better; for he is an animal that is very apt to become headstrong and fractious, by a small amount of indulgence in his own way. I entirely deprecate any fighting with the horse, or punishment with whip and spur, which he can resist; but I insist on the necessity after proving to the horse that he has nothing to fear, and after teaching him to understand one's wishes of shewing that he must obey. I shall endeavour, in due course, to explain to the reader how such obedience can be peremptorily enforced.

The rough and ready style of breaking.
The method of reducing a horse to discipline, by forcibly securing him, getting on his back, and sticking on until he bucks himself to a standstill, is applicable only to unbroken animals of a more or less mature age, whose owners demand nothing further, than to have them made "quiet to ride." The objections to this method, as far as I can see, are : that it is not always possible to obtain the services of a rider of sufficient pluck and adhesiveness; that some horses, by " throwing themselves over," can get rid of any man off their back; that if the horse wins the fight, the victory will have the effect of making him much worse than he was before ; that the mastery, even if the process be repeated, is, often, not permanent, especially with a new rider ; that it is apt to spoil the horse's mouth ; and that, in the case of nervous or sulky animals, it is liable to increase their particular faults. The buckjumping style of breaking is, of course, only good as far as it goes, and has no just claim to teach the manners that make the horse, as assuredly as they do the man.

Summary of the principles of the art of rendering Horses docile may be summed up as follows :
1. To obtain control over the animal.
2. To prove to him that he has nothing to fear from us, or from the surroundings in which we place him: in other words, to give him " confidence " and cure him of " nervousness."
3. To teach him to understand the meaning of the indications by which we desire to convey our orders to him.
4. To make him obey our orders in the most implicit manner, in the event of his offering deliberate resistance to them.
5. T o instruct him how to use his powers to the best advantage.
6. To make, by repetition, these acts of obedience and " cleverness " thus taught, into confirmed habits; so that the horse, who is, essentially, an animal of habit, may become a permanently useful servant. As an illustration, I may say that we should conduct the education of a colt or filly, according to the principles we should adopt with a recently- caught young savage whom we desired to make a useful servant. While shewing him that we had complete control over him, we should prove to him that he had nothing to fear from us, and, in doing so, would gain his confidence and affection. We should teach him our language, and, according as he understood our words, so should we demand implicit obedience to our orders, and would, thus, quickly establish the desired habit.