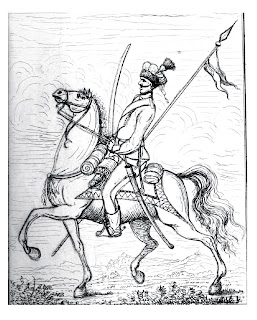 Today there was one snowy day on the East Coast of the US of A. Good day to do some painting and reading, I suppose.

I always wonder how our ancestors could cope with  the freezing winter months, when they liked to wage war and invade their neighbors like the winter 1664 campaign against the Grand Duchy of Muscovy aka Russia.  It was during this unfriendly season that they started serious military operation over the frozen swamps, lakes, and rivers across the large areas of the Northeastern Europe. Polish-Swedish Wars and Polish-Muscovy  (nota bene Poland stopped using Muscovy and adopted new name  'Russia' around 1772 or so) Wars of the XVI-XVIII ( 16-18th) centuries were conducted during all seasons, including the coldest months. I guess they, the people of the Northeastern Europe, were the exception to the rule in the European warfare of the early modern and modern eras. Only Polish-Lithuanian  and Mongolian-Tatar armies were able to defeat and capture Moscow and do that to the Russian in their wintry country while the Western European armies of Napoleon and  later the German armies of the notorious  psycho and murder of millions Hitler could not withstand the cold and snow, eventually perishing under the snow, sleet and ice.

Eh, so many horses died in those wars, and the Napoleonic defeat in 1812 had direct bearing on the collapse of the so called Old Polish Horse as viable breed/type. But it also spelled the beginning of the Polish Arabian breeding, so successful in the late XIX and XX (20th ) centuries.

And this leads me to this subject – 'Ułani' or English Uhlans (actually older form was 'Halani') - the Polish lance-armed, wearing a 'czapka' ('chapska' square-topped hat of the Great Steppe origin) and 'kurtka' (a double-breasted Polish cavalry jacket), cavalry. They appeared in Western military history during the War of Polish Succession (1733=38) http://en.wikipedia.org/wiki/War_of_the_Polish_Succession in the army of the Saxon and Polish King. It took almost a 70 odd years for these uhlans to become famous due to their service with the Napoleonic armies. I will write about that some other time...
So I wanted to start this theme, and I will be returning to it every so often, because I found some early images of the Polish Uhlans from the XVIII ( 18th ) century.
Two horsemen in full uniforms, showing all the distinctive characteristics of the early Uhlan uniforms. From Charles de Warnery's book on the light horsemen writtine in late XVIII century.

Polish name "Ułan" for these fine horse soldiers comes from the Polish-Lithuanian Tatar noble family surname 'Ułan,' and it was made especially famous and thus survived into the posterity because of one cavalry regiment commander named 'Aleksander Ułan' who was commanding the Polish cavalry 'pułk' - sort of a  regiment - in the Polish-Saxon king's service (during the Saxony-Polish-Lithuanian Commonwealth Union 1733-64) and this regiment was known via his surname as 'dzieci Ułanowe' (Ułan's children) and as such name was Germanized into 'der Uhlan'.

Nota bene there were several 'pulks' in the king's service but they all took this new name for light lance armed cavalry after Aleksander Ułan had died. They returned to Poland from Saxony in 1764, because our king Augustus had died, and they carried the name 'Ułan' in the Polish-Lithuanian army, during the Bar Confederation days and later after the Partitions
So after the Partitions of Poland (1772, 1793, 1795) some of the Polish cavalry regiments were forcibly incorporated into the practitioners' armies (Russia, Prussia and Austria), but only the Napoleonic wars made them Europe-famous and most desired in all European armies and beyond... 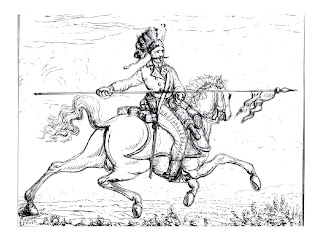 I must add that the first Ułan regiments were of the Polish (Lithuanian ) Tatars origin, who at first made the uniform to their liking and used their favorite weapon – a light lance (dzida or rohatyna) with a pennon, along with a sabre, pistol while the officers even carried bows as sign of prestige and rank.

In some not so distant future these Tatars and their history will be told here in some detail, or so I hope.
Pa ka
ps
the picture that I use for my 'avatar' is of such pre-1795 Polish-Lithuanian uhlan officer - done some years ago.
Posted by Dario T. W. at Wednesday, February 10, 2010

Yes, and an early one too, this Prussian general who praises our uhlans has been my greatest discovery in the google books :)