Salve,
leaving the present politics behind, let us turn again to the period prints from XVII century. 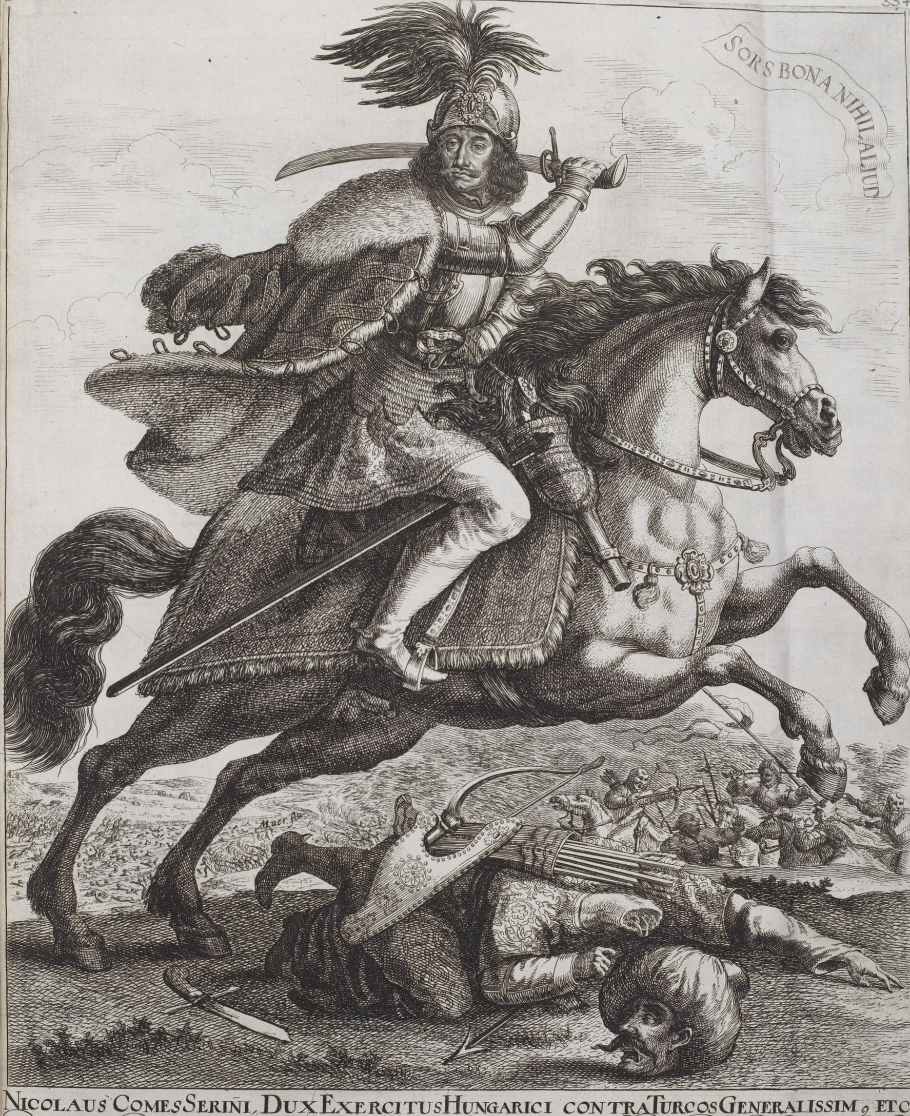 This print shows  Croato-Hungarian aristocrat, poet and military leader Sir Miklós Zrínyi/Nikolaus Zrinski
again we have typical hussar equipment, a shishak helmet adorned with feathers in a jewelled feather holder and half-armour with coat-of-mail protecting the hips. Instead of the wild cat pelt our hero covers his armoured torso and arms with mente lined with fur and with a huge fur collar. Typically Hungarian nobility would use a kaftan called dolman under the armour or under the over-garment (like delia, szuba or mente). 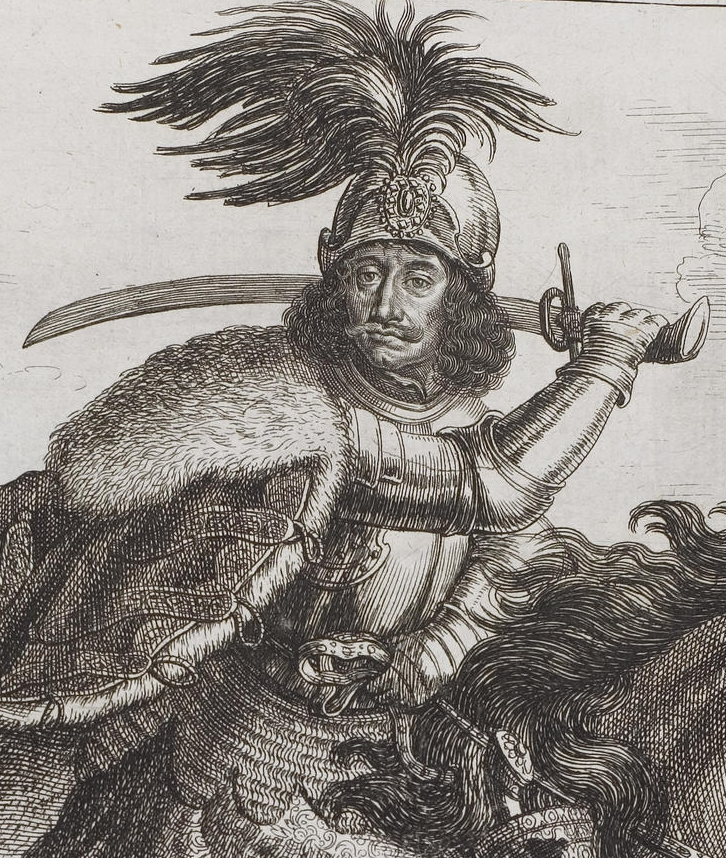 Note the curved sabre with  a thumb ring to put one's thumb finger there, holstered pistol (presumably 2) and a sword under the thigh 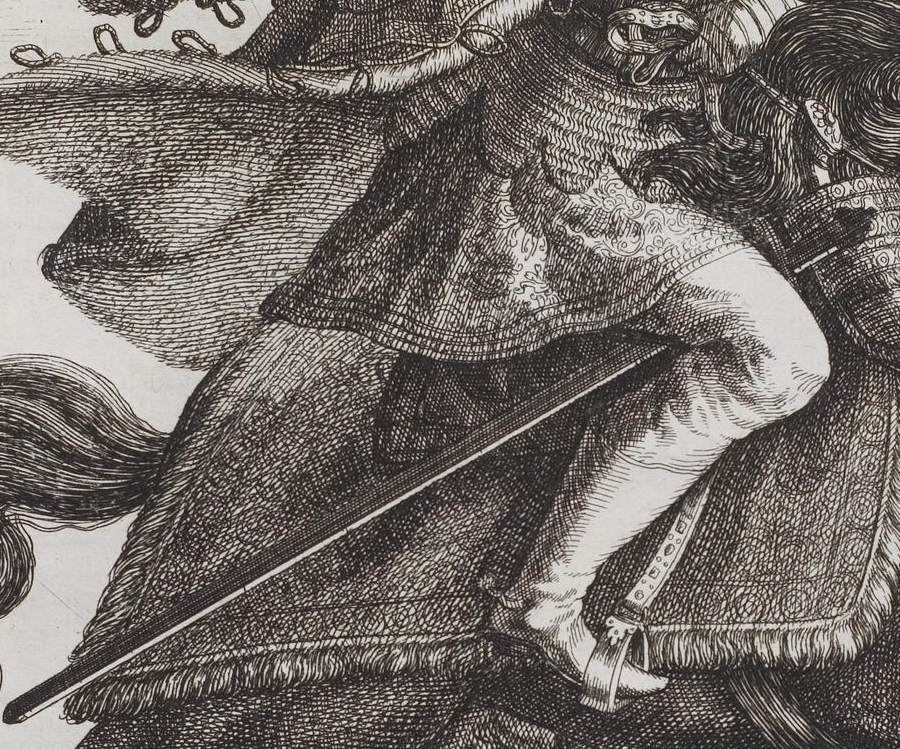 His footwear is typical of the Polish and Hungarian nobility - a mid-length Moroccan leather boots, saddle not visible except for parts of the skirt (perhaps he is using a Ottoman Turkish style saddle), while stirrups and stirrup leathers are prominent. He is riding short,  so whether this was characteristic of the Croatian and Hungarian cavalry or this was his own style of riding might be beyond discovering, while it is a fact that the author of this engraving decided to show this style of riding. and the artist was  quite well  acquainted with the Eastern European military, having lived and worked in the Kingdom of Poland prior to moving back to Germany (Nuremberg).
Horse, a true Baroque animal, is spirited and a bit fearsome, bitted with a long-shanked curb-bit and lead with a single set of reins (while it was popular in our part of Europe aka Eastern Europe to use two sets of reins, or at least a lead rein in addition to curb-bit reins), his chest displaying a very nice metal halzbant adoring the leathers of his breastplate; I wonder if the engraver omitted the the adornment (horse tug or just a metal half-moon ) under the throatlatch, typical of the bridles of the Eastern European military? Horse is covered with a Turkish or Persian style rug-shabraque (could have been of the msot expensive materials, with gold, silver and silk thread), a fashion typical to the Eastern European military.

Again, we are given a sketch of a winged hussar with a shishak helmet, wild pelt on his shoulders, but it is unclear if he holds the lance or his companion rider who is also wielding a sabre. 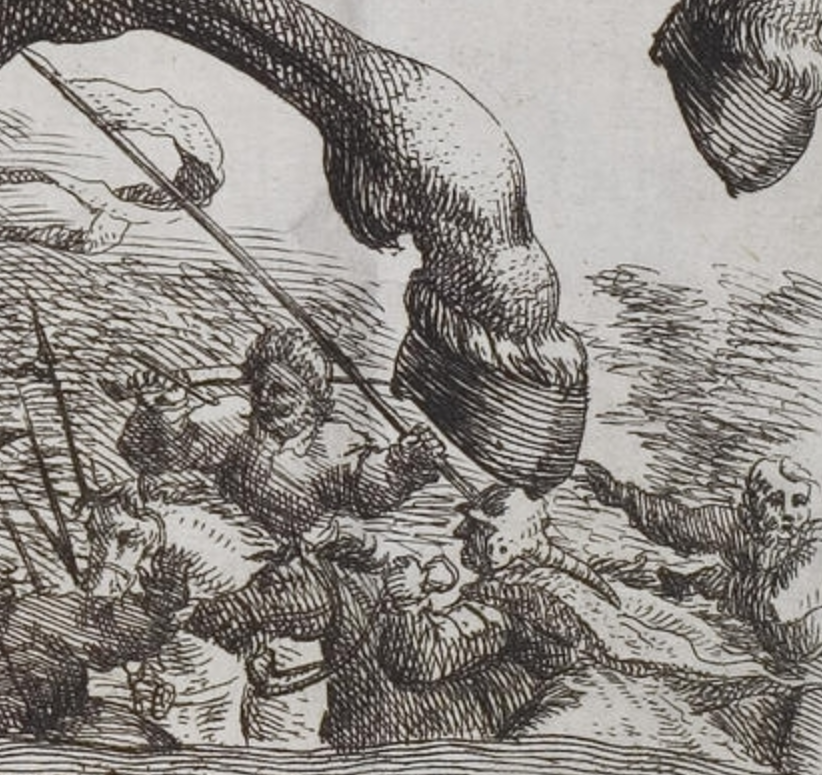 Nice drawing of a Turkish bow in a bowcase, arrows in a quiver, and in the background a Turkish horseman executing  so called 'Parthian shot' 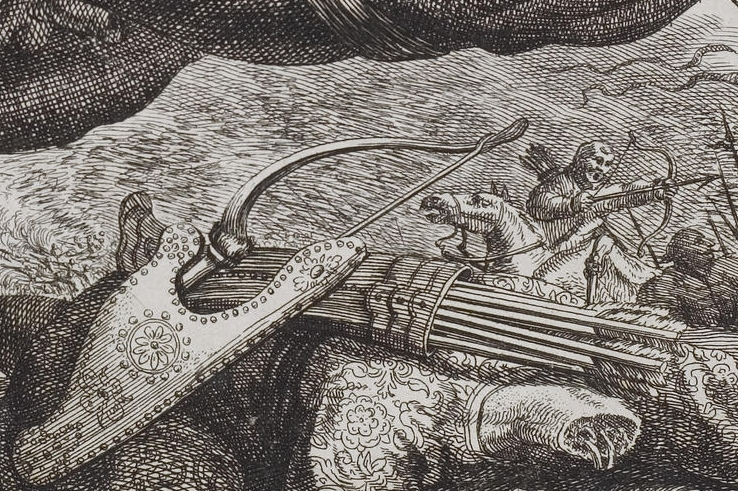 the following citation from 1911 Britannica describes nicely this Kingdom of Hungary aristocrat:
...

ZRINYI, MIKLÓS, Count (1620-1664), Hungarian warrior, statesman and poet, the son of George Zrinyi and Magdalena Széchy, was born at Csákvár. At the court of Péter Pásmány the youth conceived a burning enthusiasm for his native language and literature, although he always placed arms before arts.
From 1635 to 1637 he accompanied Szenkveczy, one of the canons of Esztergom, on a long educative tour through Italy. During the next few years he learnt the art of war in defending the Croatian frontier against the Turks, and approved himself one of the first captains of the age. In 1645 he acted against the Swedes in Moravia, equipping an army corps at his own expense. At Szkalec he scattered a Swedish division and took 2000 prisoners. At Eger he saved the emperor, who had been surprised at night in his camp by Wrangel. Subsequently he routed the army of Rákóczy on the Upper Theiss. For his services the emperor appointed him captain of Croatia. On his return from the war he married the wealthy Eusebia Draskovics.
In 1646 he distinguished himself in the Turkish war. At the coronation of Ferdinand IV he carried the sword of state, and was made ban and captain-general of Croatia. In this double capacity he presided over many Croatian diets, always strenuously defending the political rights of the Croats [ 1046 ] and steadfastly maintaining that as regarded Hungary they were to be looked upon not as partes annexae but as a regnum. During 1652-53 he was continually fighting against the Turks, yet from his castle at Csáktornya he was in constant communication with the learned world; the Dutch scholar, Jacobus Tollius, even visited him, and has left in his Epistolae itinerariae a lively account of his experiences. Tellius was amazed at the linguistic resources of Zrinyi, who spoke German, Croatian, Hungarian, Turkish and Latin with equal facility. Zrinyi's Latin letters (from which we learn that he was married a second time, to Sophia Löbel) are fluent and agreeable, but largely interspersed with Croatian and Magyar expressions.
The last year of his life was also its most glorious one. He set out to destroy the strongly fortified Turkish bridge atEsseg, and thus cut off the retreat of the Turkish army, re-capturing all the strong fortresses on his way. He destroyed the bridge, but the further pursuance of the campaign was frustrated by the refusal of the imperial generals to co-operate. Still the expedition had covered him with glory. All Europe rang with his praises. It was said that only the Zrinyis had the secret of conquering the Turks. The emperor offered him the title of prince. The pope struck a commemorative medal with the effigy of Zrinyi as a field-marshal. The Spanish king sent him the Golden Fleece. The French king created him a peer of France. The Turks, to wipe out the disgrace of the Esseg affair, now laid siege to Uj-Zerin, a fortress which Zrinyi had built, and the imperial troops under Montecuculi [ Raimondo Montecuccoli ] looked on while he hastened to relieve it, refusing all assistance, with the result that the fortress fell. It was also by the advice of Montecuculi that the disgraceful peace of Vásvár was concluded.
Zrinyi hastened to Vienna to protest against it, but in vain. Zrinyi quitted Vienna in disgust, after assuring the Venetian minister, Sagridino, that he was willing at any moment to assist the Republic against the Turks with 6000 men. He then returned to Csáktornya, and there, on the 18th of November, was killed by a wild boar which he had twice wounded and recklessly pursued to its lair in the forest swamps, armed only with his hunting-knife...*

His poetical works first appeared at Vienna in 1651, under the title of The Siren of the Adriatic (Hung.); but his principal work, Obsidio Szigetiana, the epopeia of the glorious self-sacrifice of his heroic ancestor of the same name, only appeared in fragments in Magyar literature till Arany took it in hand. It was evidently written under the influence of both Virgil and Tasso, though the author had no time to polish and correct its rough and occasionally somewhat wooden versification. But the fundamental idea — the duty of Hungarian valour to shake off the Turkish yoke, with the help of God — is sublime, and the whole work is intense with martial and religious enthusiasm. It is no unworthy companion of the other epics of the Renaissance period, and had many imitators. Arany first, in 1848, began to recast the Zrinyiad, as he called it, on modern lines, and the work was completed by Antal Vékóny in 1892.

Portraits of Sir Nicolas, showing the national costume of the Hungarian and Croatian nobility of the period, very similar to the Polish one. In the first portrait he is wearing a 'dolman'  with a 'mente'? lined with fur.

In this portrait he wears his crimson kaftan or dolman (over a shirt), and over the dolman he wears a mente. Flanged mace or buzogány in his right hand is the symbol of his command and military prowess. 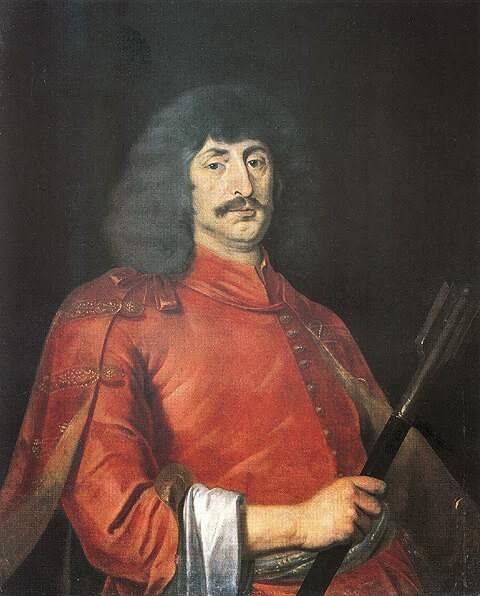 Enjoy
*
Until this day, legend maintains that he was killed at the order of the Habsburg Court. No conclusive evidence has ever been found to support this claim; however, it remains true that the Habsburgs lost their mightiest adversary with his death (from Wikipedia).
***
Zvonimir Grbasic, Croatian artist and military historian (in English speaking workd known for two books on cavalry - here and here) drew a very fine reconstruction of ban Nicolas Zrinski on horseback some years ago.
I received artist's permission to use his reconstruction on my blog, so it is my pleasure to display it here, in its beauty : 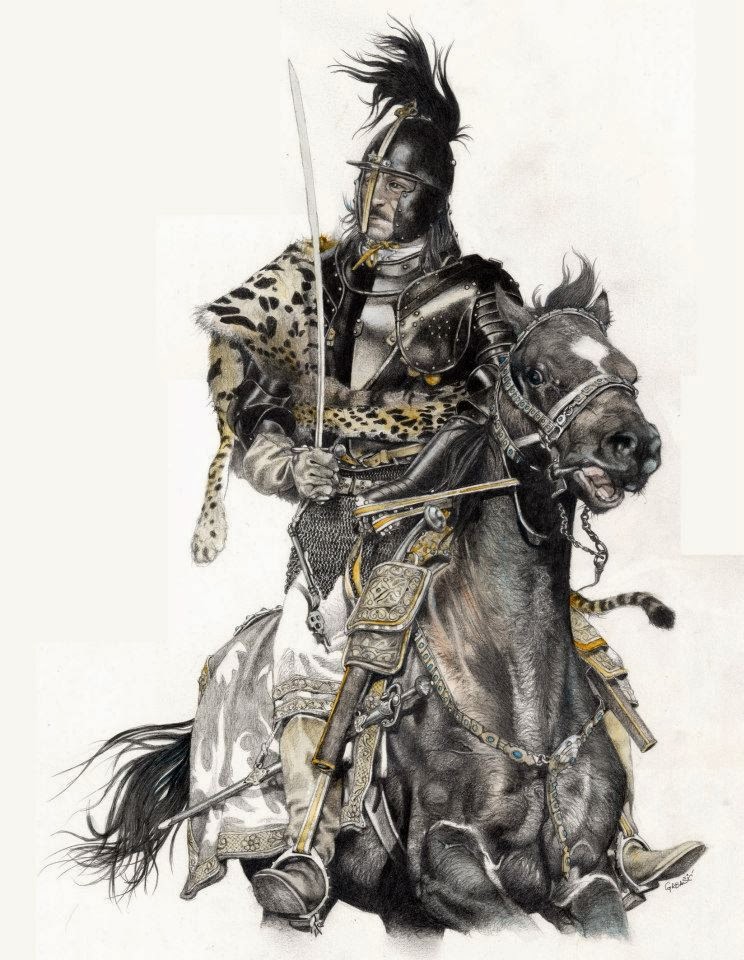 By the way Zvonimir is about to bring more books to us, the reader and admirers of his art and research, so I am looking forward to see more of his books on Amazon.
Thank you Zvonimir!

ps
some military aspects & assessment of the warfare on the Hapsburg-Turkish border on this page
ps'
Miles Cameron's 'Red Knight', just received a new and fantastic webpage 'facelift,' as the second volume in the series is about to be released, so do visit it to see yourself and definitely read the first volume when you can - medieval and magical world - with dragons, chivalry, demons, knights and strong damsels -  Traitor son Cycle
Posted by Dario T. W. at Monday, January 27, 2014

About the one on the top. It is NOT a rhumb ring. Its wrong shape to be a thumb ring, its wrong angle to be a thumb ring, and it isnt even on the side that thumb rings are you can’t put your thumb throu. Its a side ring made to provide addisional protection. If there is a finger you would stick throu its index finger to place it on the crossguard.

mosci pan Pawel,
you know, I may be wrong here - thanks - I will try to address this issue soon and correct it too