a sketch and some articles on dumbing down in the US

Salve,
been sketching in Mypaint since my Wacom Intuos 4 revived itself and 'stopped' giving me trouble :) - by the way I am thinking about buying a tablet to draw on, been exploring various ideas.

Ad rem, I have been sketching in MyPaint and hence this sketch, still unfinished, of a  XVII century Hungarian soldier

also, a sketch of a Hun warrior and a bridle - after some sketches by M. V. Gorelik - that is still in development as per equipment, pose and colours 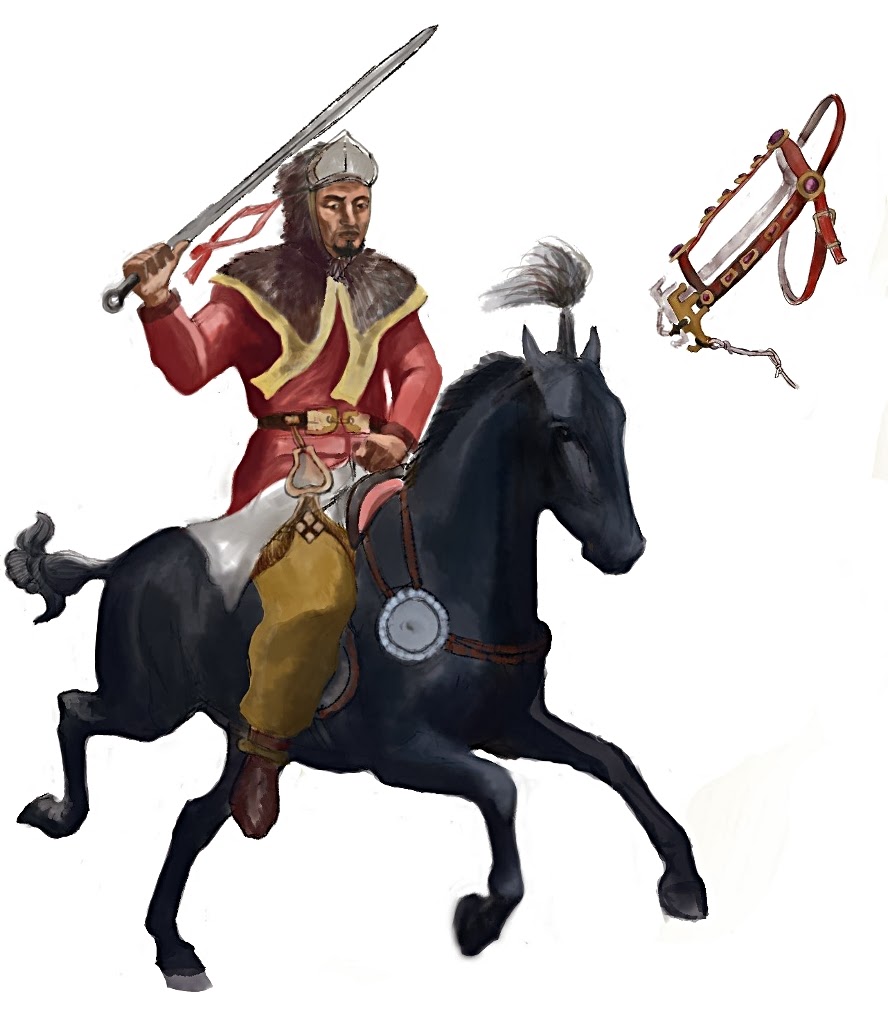 On larger and more important issues - I do not write here much about current day politics et al (unless it is about horses like the mustangs in the US) , but this merits a break in this tradition.
Education, nowadays an integral part of the chivalrous  pursuit & personal growth, I dare to insist :)
Gurdian reports that US President's State of the Union address is .. dumber. - sad news indeed.

But then, already in 2009,m  in Oklahoma they dared to publish these shameful and tragic results - only one in four Oklahoma public high school students can name the first President of the US... while only 3 percent of the students surveyed would pass the US citizenship test required by law and administered to the applicants for the US citizenship.
2010 survey on US history of high school students :

Just 13 percent of high school seniors who took the 2010 National Assessment of Educational Progress — called the Nation's Report Card — showed solid academic performance in American history. The two other grade levels tested didn't perform much better, which just 22 percent of fourth-grade students and 18 percent of eighth-graders scoring proficient or better.
The test quizzed students on such topics as colonization, the American Revolution, the Civil War and the contemporary United States. For example, one question asks fourth-graders why it was important for the United States to build canals in the 1800s.

While this 1912 test from Bullitt County Schools, KY,  for 8th graders -

Interesting view - by Mort Rosenblum - on growing lack of foreign news(not entertainment)  reporting in the US.

An interesting view (from 2009) on the decline of humanities in the American University  - including these results of 2003/4 academic year across the US
English: from 7.6 percent of the majors to 3.9 percent
Foreign languages and literatures: from 2.5 percent to 1.3 percent
Philosophy and religious studies: from 0.9 percent to 0.7 percent
History: from 18.5 percent to 10.7 percent
Business: from 13.7 percent to 21.9 percent


A view on classical education: The Death of Classical Education and Its Consequences -

Thomas Jefferson on education :  'If a nation expects to be ignorant and free, in a state of civilization, it expects what never was and never will be.'

“What constitutes a State?
Not high-raised battlements, or labor’d mound,
Thick wall, or moated gate;
Not cities proud, with spires and turrets crown’d;
No: men*, high minded men*;
Men*, who their duties know;
But know their rights; and knowing, dare maintain.
These constitute a State.”

*Jefferson wrote before the mass suffrage et al, so today it means all citizens - men and women.

And this essay by Dorothy Sayers:  The Lost Tools of Learning
ps
I should mention that I am a big follower of the idea of classical education and have done home-schooling with much success, that I am very proud of :)