Salve,
German woodcuts and  printmaking of XVI century contains some most interesting images regarding early hussars and light cavalry development. Masters like Dürer, Burgkmair, and Beham are just a few artist perfecting this craft while working on a project for thrHoly Roman Emperor Maximiliam I.
There are some examples:
1. 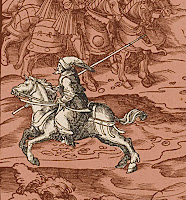 My own little sketch, with a woodcut print insert from a book by XVI century Polish poet and hussar himself Adam Czahrowski, the book titled 'Treny i Rzeczy Rozmaite" www.pbi.edu.pl/book_reader.php?p=55204
, (author of this famous poem  -  Duma_ukrainna    here sung by Polish famous musician Czeslaw Niemen Niemen Duma , and also performed by historian,  historical music singer and researcher  Jacek Kowalski  jacek_kowalski_duma_ukrainna   ).
Pan Czahrowski, hot-headed and warlike nobleman like many of that turbulent period of last quarter of XVI century, after fighting and losing against the grand hetman Zamoyski's army at Battle_of_Byczyna fled to Hapsburg Hungary and fought there for almost 10 years as a hussar comrade (among others he participated in the defense of fortress of Gran), even wrote a letter about his movable estate pawned with Kosice(then Upper Hungary) merchants.

ps
Jack Lalanne, French-American  fitness  expert and exercise Titan passed away yesterday at a tender age of 96. I learned a good many  things from his videos and guidance, and I share his love for push-up finger-tip push-ups by Jack -  May you train angels in heaven, Master Jack - Pacem Aeternam!
Posted by Dario T. W. at Monday, January 24, 2011

Ah my favorite topic :)
Thanks for the splendid depictions of early hussars you've found in various woodcuts and related art (and subsequently collected on your blog) - your own art is impressive as well.

It seems there is something similar to the galka/pommel found on the later "copia" lances...

Thanks for both of You guys - Dario and Samuel - for sharing such great pictures. I need to study 16th century warfare in greater detail ;)

Hey Samuel,
I have a more precise drawing of this sabre scabbard engraving - i will post it soon here :)
I found many more images of early hussars but mostly without lances, showing their horse harness and tack, clothes etc. Will post them here with my own drawings etc
I got the Jorg Breu image from your comment at myarmoury.com

Michal,
there is so much iconography in the digital 'bibliotheques,' digital publications from the period and people taking photos of museum collections and showing them on the net - eons of time needed to study them all ..
I will try to show some regarding horse tack, horsemanship and horseman arms and armor along with customs, ethos and lore, God willing ...

Dariusz,
I was wondering what the thing wrapped around their arms (especially number 1, right arm)is. A part of the cape maybe?
By the way, great Saka sketch. Hope others will follow.
Greetings

Philip,
thanks for your comment - well, the 'thing' is but a sleeve of his robe/caftan, with a slit at the armpits so they would wore those rboes/caftans as outer garment - i will post more images from the period showing early 1500s garments of these horsemen, However, these robes appear to have been direct descendants of the ancient Median robe or 'cantuš', also know in the later Roman empire as ridding coats - surviving Roman examples are from IV century AD Egypt. These garments were adapted (along with horse tack and horse vocabulary etc) by the Turkish tribes from their Iranian nomadic 'cousins'. Our Polish ''żupan'' and ''kontusz'' seem to have been developed from a 'union' of these nomadic robes with some other Medieval and early modern garments from Eastern and Southern Europe etc.

It's a new comment on old post, but I hope to get an answer. Can you tell me, please, which is the source of these images Hussars?