Salve,
the subject of today's entry will be woodcuts of a German printmaker named Lucas Mayer who was active in the Holy German Empire  from 1566 through 1606. Amongst many he produced a woodcut showing our king Stephen Bathory as a prince of Transylvania and later as king of Poland-Lithuanian Commonwealth. 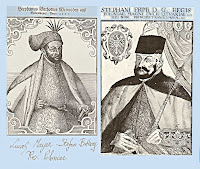 First woodcut shows a battle between the armies of Transylvania and Ottoman Turks in August 1595 ( most likely Michael the Brave indecisive (victor had to withdraw) victory over Ottoman commander Sinan Pasha front guard corps - battle of Calugareni where 16000 Wallachians plus 7000 Hungarians and 12 cannons under captain Kiraly bloodied 100000 Turkish force in the Neajlov River  canyon near Bucharest  ), with plenty of detail on each cavalryman dress and armament

Second woodcut shows a battle again between the Transylvania and Ottoman Turks in 1595. with many interesting ways of lance handling - resembling Sarmatian, Roman and medieval 'fechtbuch' techniques. 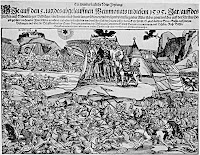 Third woodcut shows Hungarian army, vassals of the Hapsburgs,  of the 1596 commanded here by Nicolas Palfi  or Palffy Miklos , governor of Gran,  meeting the refuges under army escort, and it is very interesting as amongst other  things,  it shows feathered wings on some of the hussars 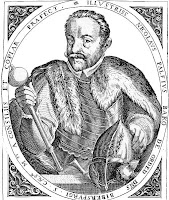 I am enjoying myself living on the High Plains of US, last weekend we went to to western horse show at the El Paso County Latigo Horse Center , Colorado lost of horses and every level of horsemanship, too bad so few boys and men participate in these equestrian sports; horses and horse sports  seem to be feminine field nowadays, who may know, perhaps for the better :) . Got to see a 1870s  Henry riffle (under restoration), about to buy my first hunting rilfe (as oppose to assault riffle - i am not going hunting, my terrier does it here ) and a nice recurve 50 lbs bow..
Also had a chance to observe  horse shoeing of many different horses, and while at it we, friendly farrier Susan and I, talked -well, Susan  talked and I asked questions mostly - about horse's hoof,  horse breeds and  hooves, mustangs and trimming hooves for crooked and injured legs & feet.
I got myself a US cavalry saddle circa 1917 in not so bad condition, 11 3/4 " seat and hope to have it restored as one of the straps is broken wikipedia.org/wiki/McClellan_saddle
Posted by Dario T. W. at Monday, January 17, 2011

Great woodcuts, thanks for sharing Dario!

Michal,
I do think so - the wings, the lances (copia), Turkish horsemen, saddles and horse tack, arquebusier cavalry, etc -love them very much, thanks God for the German artists of the XVI century.

thanks, could you provide more information? I am curious, naturally..