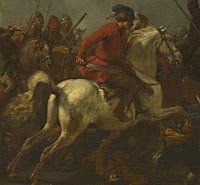 Salve,
both at the Hermitage, Russia, and at the National Gallery, UK, there are   painting showing a battle scene between Western soldiers with blue and yellow colors (colors of Swedish army at the time) and somewhat 'oriental' looking cavalrymen. This is perhaps one of a few scenes where our master Wouwerman painted a scene from the Polish-Swedish was known as the Deluge or Second Northern War (1655-60). Perhaps he heard of the exploits of the Stefan Czarniecki division of the Polish army in Denmark, also described by our Polish participant J.Ch. Pasek Polish Baroque memoirs

This is a scene showing a Swedish cavalry outfit-company or squadron - about to lose its color.

With Swedish infantry being attacked and repulsing the charge?

The Polish cavalrymen carry warhamers and battleaxes, and Wouwerman painted them with  rather short sabers, but we can forgive him :) . There are several distinguished features attributable to Polish Cavalry of the times besides the warhammers and sabres, long lances, red or crimson color of their clothes, entirely fur or fur-trimmed caps with feathers, they appear to use a 'short seat' (shorter stirrup leathers), the same as the 'Polish rider' en.wikipedia.org/wiki/The_Polish_Rider in the Frick Collection, they use metal (gilded) decorated bridles, throatlatch of  the center grey horse is decorated with a dyed red horse-tug...
More details:

You have raised a lot of questions, but fortunatly the works of the Wouwerman family are described rather well by art-historians.

Unfortunatly (!) only from an art history point of view, so you can't bother them with questions on flags, weaponry and the like. There was a Wouwerman exhibition last year, I'll try and see if they have desctibed this painting as well.

Hi Dario
Can you send me your email?.the mail that you wrote in my blog, is incorrect .
Best.
Angel.

Rampjaar,
thanks a lot for your comment, I will gladly wait and see if there is more about this painting. btwy, The Russians are saying about their painting that it shows the Polish-Swedish war 1655-60.
AGP,
the email to contact me:
dario966 [at] yahoo [dot] com - you know number [2] on the keyboard (so I do not get Spam or other garbage mail) - or my second email is: dario966 [at] gmail [dot] com