A little Morisco curb-bit I

Salve,
I am preparing some drawings on curb-bits and terminology, and I got this image (woodcut print0 from the Polish-Lithuanian winged hussar Dorohostajski book Hippica  - link in my earlier post http://dariocaballeros.blogspot.com/2009/12/czolem-let-me-return-for-little-moment.html 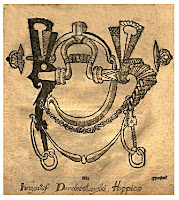 These curb-bits (munsztuk in Polish) - known in Europe as 'morisco,' 'gennette,' 'gineta' between XV-XVIII ( 15-18th) centuries, were know here, in the Americas, as a 'ring bit' or 'mule bit'( US ) and the  chileno or morisco (Spanish Texas, pre-1848 US Southwest and Latin America) bit. Instead of a curb chain it uses a fixed ring (some are removable while others are permanent) attached to the port (short port it should be).

According to a Californio writer and horseman Ed Connell (died in 1970s), it was supposed to be used on a 'finished' horses by experienced riders - check some paintings of Californio riders from early 1800s, I imagine in Puerto Rico, Cuba and Santo Domingo they might have done it too.

It predated spade curb-bit (still popular in the US), and perhaps came to the medieval Spanish horsemanship (in Spain) tradition via Moors hence perhaps the name: 'morisco.' But it could have been developed  from the Roman Newstead-type  bit (as shown in the Ann Hyland's book 'Training the Roman Cavalry'), quien sabe :) (who knows): 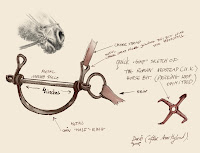 In Europe, Africa and Asia it was used for the war horses and parade horses (stallions and geldings alike, and mares where Arabs were involved) - Polish Army Museum has a few of these dated to the XVII century.
Obviously in the Americas it was not a war-stallion bit, but a cow horse bit, especially in the good old US. In California, until the 1930s, was also used on parade horses along with a very elaborate 'barba de freno', the same in Mexico and other Latin America. They still may use it in southern Latin America. This bit was very popular with the Navajo and other US Southwestern tribes during the XVIII and XIX century, and appears in the Southern Cheyenne ledger drawings from the 1870s and 1880s (eg  Arrow's Elk Society Ledger).

It's application - it is no more cruel than any leverage or non-leverage bit when used by inexperienced or heavy-handed rider and when used on untrained horse.

Ed Connell, his book 'The Reinsman,' stated that it took 4 years of training, from snaffle through hackamore to curb-bit, to finish a reinsman's horse, to use this curb-bit correctly.
So I guess at one time there were true 'ecuyers' (master horsemen) in America (especially showmanship 'crazy' cowboys,  Spanish-American and Native American rider), but also regular cowhands who destroyed horses mouths with heavy bits... c'est la vie.

Perhaps it could be beneficial for a student of this subject to read some good books by authors like Spaniards Pedro de Aguilar or Pedro de Machuca (XVI century), French 'ecuyers' Pluvinel and la Gueriniere (XVII and XVIII centuries), Californio reinsmen like Ed Connell, horsemanship specialist like dr Deb Bennett (especially her  explanation here Deb Bennett on morisco or ring bit  - where she states:

"[...] my Mexican bit is kind, your 'mule bit' is unforgiving. I mean here not merely the big shank length, which multiplies the leverage by which the tongue and bars could be crushed, but the angular contour of the tongue-relief -- there IS no tongue relief in the mule bit.This stuff happens when a group of people, a culture, a society, get into a hurry. I state in "Conquerors" how Stephen Austin's colonists, when they came to Texas, rejected the Mexican work-concept -- Mexicans like to work in teams, so that man and horse can expect a little relief every so often;
Anglo-Texans prided themselves on being able to do the whole job alone. This work ethic affected everything from saddle design to the choice of rope and the way the rope was used. The Anglo colonists also preferred a different type of horse than the Mexicans. Whereas the Mexicans rode horses of Iberian descent, i.e. tamed mustangs, Austin's colonists and everybody who came from the East after them, until just before the Civil War, brought Morgans and TB-Morgan crosses. The Easterners expected their horses to be in work between four and six years of age*. They were not at all interested in learning traditional Mexican and Spanish training techniques that not only involved a long preparatory period in the bosal, but might mean the horse wouldn't be bitted until he was six years old or more.
The Anglos wanted control, and thought that the bit was the primary tool for control [...] Anglo thinking along these same lines also produced the 'western curb', which is not really an evolution from the Weymouth which Austin's colonists would already have been familiar with, so much as it is a 'chopping down' of a ring-bit -- i.e. 'chop down' the port so you only have a tongue-relief. You then hybridize that by putting on shanks that have both an upper and lower part (notice that mine has zero upper shank and yours has very little), and removing the ring and replacing that with a curb chain. This much is similar to the development which produced the Spade from the Morisco.'' )

...or simply peruse 'the Encyclopedia of Bits and Bridles'...
More to come.... I hope

*
In Old Poland, pre-1795,  Polish ridding horses were trained circa 4 years old  or later, and 4-6 year old stallion ('ogier') was called 'źrebiec' and was trained for war and chase whereas the older stallion was called a 'drygant,' or  a 'stadnik' if he became a stud horse.
Polish warriors and cavaliers rode stallions and geldings to war and chase, not mares - or so the writers and inventories of warrior's movable estate and testamentary provisions make us believe.
Posted by Dario T. W. at Wednesday, January 19, 2011

Nugent Brasher is doing independent research in Doubtful Canyon, New Mexico, USA, trying to determine whether it is a Coronado campsite. He found a few jingles (coscojos), a chain swivel, and a couple of rein chain links. He had been corresponding with me about the possibility of dating the material. It is difficult, but we think the ring bit, Morisco, or freno de argolla, was used in the 1500's and later in New Spain. I have a collection of them, mostly from Chihuahua, Mexico, and New Mexico, USA. Their use was quite prevalent. It was good to see your depiction of the Hippico bit. It is no doubt early, but we wonder what its date is. Many of our early Hispanic ring bits have multiple tiers of jingles hanging from the bridge (puente), the bar connecting the lower bit shanks.

Thank you for posting your work.

Mr Turley,
you are doing me a great honor sir, and I thank you for your comment and explanation.
I had the pleasure of reading your book several years ago. I have a drawing of a morisco bit that I made after a drawing in your book (page 101), copied along with your description in Spanish. Actually over the last couple of years I have been reading and drawing colonial (Spanish) horse tack whenever I can find it - including fine drawings of late Texas historian and fantastic artist Jack Jackson. More work is waiting to get posted when time is ripe - I am very much interested in the presidiales, armored Apache and Navajo of the 17th century, native jinetes de cuera (from that Santa Fe Segesser bison hide painting etc), Comanche armored cavalry etc. That part of American history is very, very interesting.
Speaking about el freno de argolla - a gentleman from France sent me a few images of his collection of said curb-bits, I will redraw them in my fashion in the future.
I wonder if I could post my drawing of your drawing of morisco? I could email it to you first, for inspection etc.