a couple days ago my  dear friend and 'early hussars' scholar Samuel made a comment about the lances with 'galka' (knob. Apple, 'pomme') so in response to his comment I am showing a fragment of 1657-9 painting done for Swedish ambassador Claes Ralamb by hmm..., there is no agreement amongst the authorities as to the authorship, perhaps by a Polish dragoman and convert to Islam who was associated with Ralamb and perhaps procured or even drew the famous Ralamb Costume Book, while the ambassador was in Istanbul on a mission for his king Charles X Gustav of Sweden. The collections consist of 20 paintings now in Sweden.

These are spahis/sipahi of the Sultan bodyguard unit.   I had the entire Ralamb book on my computer but sadly I lost it when my Windows XP had got infected (and I use only Linux and Mac now).
And here a sample of a bit earlier, 50 yers,  Turkish lancer with knobed(with 'galka')  'copia'  drawn and etched by German artist Zimmerman circa 1605 - courtesy of Samuel. 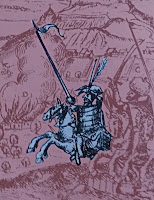 Pan Jakub Sobieski, who was one of the commissaries sent by the Polish Seym (Diet) to observe and assist the  Polish commanders during the Polish-Turkish struggle at Chocim (Khotyn), left a description of the Turkish cavalry as he saw them at the beginning of the battle. - battle described in English here radoslawsikora.republika.pl/materialy/Chocim1621/Chocim1621.pdf
Amongst others he stated:


[Ottoman] cavalry gave wonderful show with their fine clothing and beauty of their argamaks (war stallions  - I am writing a little entry on this ancient  horse, perhaps during this coming week), and with banners or pennons with glittering  knobs. Their steeds, brought from much pleasant climate and used by the long trip they had made, were much less brave and sound than we expected.
Asiatic non-warlike host, made but numbers; with long beards and not because of their war deed they demanded attention, and they were terrifying because of their screams and not due to their bravery; they were ready to run,  unable to withstand camplife, used to riches but not the war itself, they did not carry much promise for war....
Turkish European armies justly could call themselves the defence and adornment of this campaign. Veterans trained in the Hungarian wars, and their bodies, spirit and even clothing were unlike the other Turks, they retained the traces of old Christian settlers [Balkan?]. Lancers [with 'copia/kopia'] stood in their first ranks, and we saw typical weapons that Turks commonly use: bow, curved sabres, curved iron hooks[sic!], 'rohatyna' spears [shorter lances or 'dzida' 1,7-3 meters long] and more often the short iron spears [jarid or djarid – Turkish javelin], which they assault enemy with by throwing...

Polish word 'oszczep' denotes a type of a shorter lighter spear-like weapon with a small leaf- or lance-shaped head. Oszczep was used usually by throwing or casting it against the enemy or prey (hunting), hence I think it is translatable into English as 'Javelin', which is a light spear used for throwing, either on foot or form horseback, eg ancient 'palta' was carried in pair, one was used as javelin and second as a thrusting light spear from horseback, such use we see by the ancient Iranian cavalry and later by the Greeks and Macedonians etc.
In Polish we also have a name for a very short javelin of a Turkish kind described above – 'dzirit' which is a borrowing form the Turkish language.

* I used Latin word 'copia' for lance, in a meaning used by the Polish writers in XV-XVII centuries.
Posted by Dario T. W. at Sunday, January 09, 2011

Hey Michal,
thanks! But it was Samuel who turned me to the by Jakub Sobieski's memoirs about Khotyn 1621, and Samuel's steady stream of questions regarding Turkish 'copia' and javelins in his comments to my 'Turkish rider-progress I' entry, and, finally, our private correspondence.

Lovely entry! :)
I appreciate the clarification of the various Polish terms at the end...

Speaking of Ralamb's Costume though book check this link: http://goran.baarnhielm.net/draktbok/eng/alfreg.htm
Among other things one can note the great clothing diversity among the various troops and people of the Ottoman state.

The head-wear (a hat with several Up or Downturned "brims") of the "copia-wielding" horsemen from Dario's first pic is quite frequently seen on people coming from Rumelia (Europe/Balkans) - check for example Bey of Rumelia, Beylerbey of Bosnia and Rumelian herald.. Ogier Ghiselin de Busbecq in his Turkish letters describes a similar hat seen on Bulgarian women (p.103-104)link- http://www.archive.org/details/lifelettbusbecq01forsuoft

Perhaps it's some sort of a remnant from the Christian Middle ages of the Balkans (as Sobieski points out)...

Great link to Ralamb Costume Book! I had had that link on my old computer and then Swedish museum had opened their own site but since then they closed it and i lost my computer data when my Windows 'died'
I have it in a black and white xeroxcopy in my library.
Thanks Samuel!