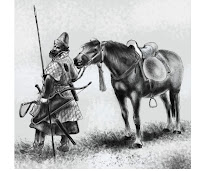 Salve,
upon reading some of the von Herberstein's notes I drew this image of a Muscovy warrior, and I gave him an Ottoman Turkish pallash taken off some Polish, Lithuanian or Tatar warrior; also I drew his horse taller than what von Herberstein described.

'They have small gelded horses, unshod, and with very light bridles, and their saddles are so adapted that they may turn round in any direction without impediment, and draw the bow. They sit on horseback with the feet so drawn up, that they cannot sustain any more than commonly severe shock from a spear or javelin. Very few use spurs, but most use the whip, which always hangs from the little finger of the right hand, so that they may lay hold of it and use it as often as they need; and if they have occasion to use their arms, they let it fall again so as to hang from the hand. Their ordinary arms are a bow, a javelin, a hatchet, and a stick, like a caestus, which is called in Russian, kesteni; in Polish, bassalich*. The more noble and wealthy men use a lance. They have also suspended from their arm oblong poignards** like knives, which are so buried in the scabbard, that they can scarcely touch the tip of the hilt, or lay hold of them in the moment of necessity. They have also a long bridle perforated at the end, which they attach to a finger of the left hand, so that they may hold it at the same time as they use the bow. Moreover, although they hold the bridle, the bow, the short sword, the javelin, and the whip, in their hands all at the same time, yet they know how to use them skilfully without feeling any incumbrance.' Some of the higher classes use a coat of mail beautifully worked on the breast with a sort of scales and with rings; some few use a helmet of a peaked form like a pyramid. Some use a dress made of silk stuffed with wool, to enable them to sustain any blows. They also use pikes.

*
now in Polish we use word 'Korbacz' [korbach] or 'Kiscien' for such a weapon, it was very popular in the Middle Ages amongst the plebeian militias and later amongst the Zaporozhian Cossacks, i.e. in the Polish-Lithuanian forces of the XV-XVII centuries.

**
Poniard (or Poignard, Poyniard, Puniard)
A term derived from the French poignard and introduced in England in the late 16th century, denoting a light dagger that had a strong blade, usually squarish in section, and a reinforced point, beadlike in shape. Some blades were deeply grooved and ridged, such a structure adding to the rigidity of the blade. Most poniards were only thrusting weapons—unlike the dagger of the time, which had larger, double-edged blades for making cutting strikes as well. When provided with a sizable cross guard and, particularly, a strong side ring for protection of the hand, the poniard served as a light parrying weapon used in conjunction with the rapier in personal combat.

Thanks for the entry Dario-
That's some fine research coupled with a nice drawing!

To meaningfully contribute to the topic - I have recently asked imci Radek Sikora if Musocovites possessed hussar-style cavalry and he forwarded this pic (done cca 1568) to me:

Note the Muscovite horse in lower-right corner being outfitted in a similar fashion to PLC cavalry.. that is "po husarsku" :) (or "po Racku" in the older days.) Interestingly one can observe the partially visible saddles - the cantle seems (relatively) high and of semicircular nature.. - something probably more suited for a lancer and very similar to Polish-Hungarian Hussar saddles of the 16th century...

some further iconography (I do think those are from Abraham De Bruyn's costume book of 1570s) :

Perhaps these "hussar-features" seen on Muscovites were a result of the early 16th century engagements/wars with PLC?