New Sketch on the Saka/Scythian theme

Salve,
it has been a while since i visited the Great Eurasian steppe. So let us return for a few moments, to take a look at the warriors' trophy taking amongst the first horsemen - the Indoeuropean or Iranian tribes of II and I millenia BC - Saka or Scythians  dariocaballeros/2009/08/skudra-irst-horsepeople.html
Ancient chronicler and story teller par excellance, good Greek named  Herodotus reports (4.64) that Scythians scalped and flayed their fallen enemies, using such 'hide' for a a cape, or even a  horse blanket etc. They also used fallen enemy skulls for drinking vessels, once such skull was fashioned into one (a custom carried by many later nomadic chieftains and warriors).
More detail from this 1829 English translation:

Every Scythian drinks the blood of the first man he overthrows in battle ; and he cute off the heads of all he kills, and carries them to the king; for not until he has brought a head, does be take his share in the booty that may be won. The Scythian scalps a head in this way—he makes a gash round by the ears, and then giving the head a shake, separates it from the skin : having scraped away the flesh with the rib of an ox, he kneads it (the skin) with his hands, and when it is well softened, uses, it as a towel, or attaches it boastfully to the bridle of his horse. He who possesses the greatest number of these towels of skin, is held in the highest honour for valour. Many Scythians sowing these skins together, form cloaks of them, like the leathern hoods worn by shepherds. And many, taking the skins with the nails from the right hand of those they have slain, form with them coverings to their quivers. The human skin is in fact thick; and when tanned, excels almost all other skins in brilliancy and whiteness. Many taking the entire skin of their enemy, and stretching it upon pieces of wood, carry it on horseback.—Such are their customs.
The heads, not indeed all, but those of their greatest enemies, they dispose of in this manner:—They saw off the skull just above the eye-brows, and cleanse it. If the man is poor, he contents himself with stretching over its external surface a piece of bullhide, and so uses it; but the rich Scythian, besides the piece of hide, lines the skull" with gold, and then it serves him for a drinking cup. In this way they serve the heads even of their nearest relatives, if on occasion of some disagreement, they have gained the advantage over them in an appeal to the king. When strangers of any importance visit a Scythian, he produces these skulls— recounts how, though his relatives, they attacked him, and how he vanquished them; and upon such actions they confer the praise of virtue.
Once in every year the governor of each district mingles a cup of wine of which those Scythians only drink who have destroyed enemies; while those who have not achieved so much, taste not the wine, but sit disgraced apart: and this is deemed an extreme ignominy. Those who have slain great numbers quaff a double cup...


Well, lately  I have done a series of sketches showing such ancient custom of headhunting... there is one of them: 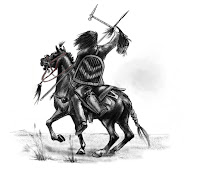 Nice entry!
It seems that the scalping and headhunting practices go way back to the antiquity...

very very nice wouldn't want to be facing that fella

thank you Samuel and Galpy :)
Please wait for the next batch - they will show otter ways o handling cut heads as trophies. Interesting enough that 2000 years later the late equestrians of the Americas- Amerindians - used heads and scalps to adorn their bridles and their horses, tie horses' tails and cut manes or tie them too, along with feathers, wild animal skins and paint on their horses..

Can I use your sketches to prepare a presentation on history?

for a school project? well, let me learn more - so do send me a PM and then we will talk