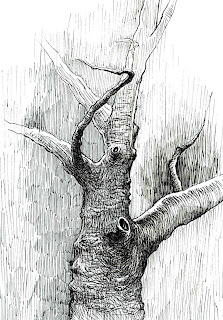 Salve,
September is always a month of sorrow for the Slavic and Jewish people of East-Central Europe, because during that sad month of 1939 Hitler and Stalin invaded Republic of Poland causing mayhem and destruction of unheard proportions, and starting World War II. For the Slavs and our 'Slavic' Jews this time was the time of genocide and Holocaust. Some 35 million Slavs and Slavic Jews were murdered, killed in action and died in course of this atrocious war. My own family suffered tremendous losses, menfolk being killed right and left while women and children were left to fend of for themselves, malnourished and abused by their Nazi German (and later Soviet)  occupiers.
Also let us remember of the millions of fine horses that perished during that war, serving their masters. World War II saw the last cavalry warfare  on large scale, modern mechanized war made horses obsolete in war.
In our Slavic pre-Christian tradition and religion our trees were sacred (as with the ancient Germanic peoples), especially oaks groves,  and I am attaching a drawing of a tree that might have been subject of my ancestors reverence and worship (although I also have Armenian ancestors as well). eg Slavic gods Weles Veles Perun in Russian Stvarog in Russian

Let us remember September 1939 and never forget our fallen people.

ps
I would like to welcome all new followers - hope to keep you interested in the weeks to come :)
Posted by Dario T. W. at Thursday, September 02, 2010