Marhaba,
I have been working on these two sketches of Turkish horses/warriors of different time periods - early Middle Ages and Ottoman empire.
the first one is going to show a retainer with a warhorse -roughly II part of the XVII century, but there is much more work to be done 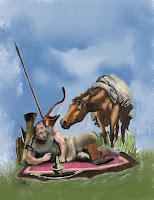 thank you for your kind words Eren efendi - :)