Salvete Omnes,
this is as good time as any to bring here the images of various equestrian monuments dedicated to general Tadeusz Kosciuszko, hero of Poland (White Eagle) and United States (Bold Eagle), hence the hero of two eagles. 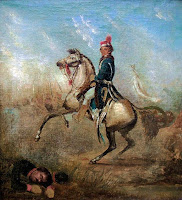 but I am going to start with this monument - erected at the Lafayette Park, Washington DC (and copy in Warsaw). It was sculpted by a Polish sculptor Antoni Popiel and dedicated by the US president William Howard Taft  on May 11, 1910.

this wonderful monument has been damaged and defaced by the protesters and rioters in the BLM /George Floyd killing protest past weekend in DC. 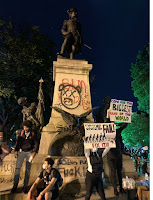 There is this little subtitled video about it .  And his famous last will demanding
that his estate executor would purchase black slaves with the funds from his estate and liberate them et al. It is so ironic, isn't it? Nota bene even our friends the Russians put this article about this travesty.
Back to the monuments
Chicago, Illinois - sculpted by a Polish artist Kazimierz Chodziński  and erected in 1904. 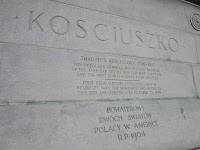 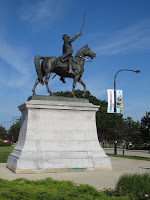 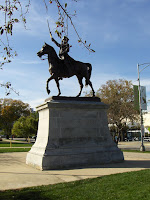 Detroit, Michigan - a replica -  the original was sculpted by a Polish sculptor Leonard Marconi for the royal city of Krakow and destroyed by the Germans in 1940 etc - a blog article on the monument with more pictures.

Milwaukee, Wisconsin - (Poles in Milwaukee)
sculpted by Gaetano Trentanove in 1904 and was a gift from the Polish National Alliance, dedicated on June 18, 1905.
- 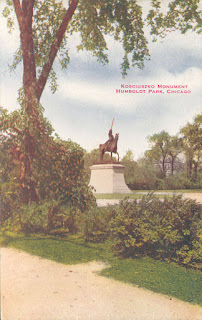 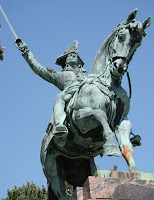 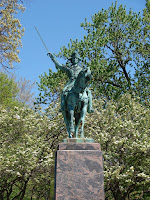 Krakow, Poland - the original sculpted( 1/4 size) by a Polish sculptor Leonard Marconi, finished after Marconi's death by Antoni Popiel and cast in 1900,  and destroyed by the Germans in 1940, a replica was made in the Saxon (the Soviet East German) city of Dresden and gifted to the city of Krakow in 1960. 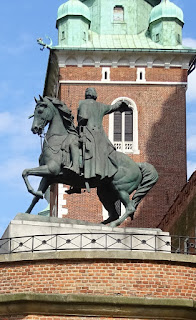 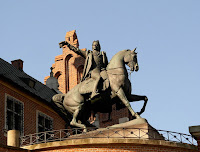 https://twitter.com/AmbWilczek/status/1267531402821713927
Polish Ambassador in the US - I have spoken with Frank Spula, President of @Pol_Am_Congress; Marek Skulimowski, President of @KosciuszkoFound; and Bogdan Chmielewski, CEO of @PolishSlavicFCU, regarding the defacement of the T. Kosciuszko statue in D.C. and their pledged support for its restoration.