I just learned that the monument to our president Ulysses S. Grant  in San Francisco's Golden Gate Park was damaged and toppled by the rioting mobs of barbarians, ignorant products of US public education  and the sworn enemies of beauty, harmony and Western society. 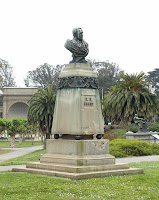 I have seen enough ignorance  towards the art and beauty in America (just look at any statistics on how many people graduate the high school, youngsters without any art or history or culture schooling, and a large percentage those graduating have no reading or comprehension skills, no knowledge of history nor poetry nor aesthetics), but this is the newest low.
It is a very direct assault on the Anglo-Saxon or WASP-controlled America, and myself, being a Polish Slav look at this barbarity with revulsion while recalling how the Nazi Germans would destroy historic monuments and our cultural heritage in Poland 1939-45, how the Soviets would do the same destruction to our cultural heritage 1939-41, and again post 1945 in the greater Polish territories. Soviet Union rule over Poland ended in 1989 but Polish people still live in the shadow of this ruthless destruction, and falsification of our history and of culture and heritage.
Nota bene look at our ethnic Indo-European group name - Slav - and it is interesting that  the word 'slave' comes from the word 'Slav'  in the English language - eg  etymology: slave comes from the ''Middle English sclave, from Old French esclave, from Medieval Latin sclāvus, from Sclāvus, Slav (from the widespread enslavement of captured Slavs in Europe and Middle East'' between VI century through XVII century).

So to lighten the spirit let us look at some of the pictures from the Wiki Commons gallery showing horses from the tremendously glorious, monumental and dynamic Grant's Memorial at the US capital.
The monument was created and executed by architect Edward Pearce Casey and sculptor Henry Merwin Shrady  between 1902-22 (Shrady died two weeks - 12th April 1922-  before the monument was unveiled on April 27, 1922 ). It may be of interst that maestro Shrady took many years of studying horses including dissecting them, like the famous horse painter from the XVIII century Britain -George Stubbs. 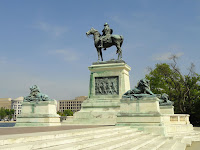 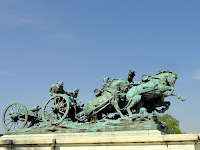 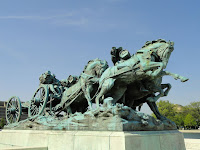 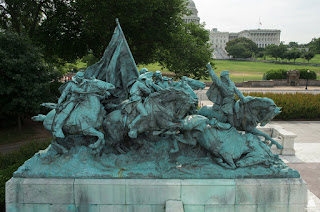 https://pjmedia.com/news-and-politics/stephen-green/2020/06/01/uab-professor-sarah-parcak-temps-rioters-to-destroy-birmingham-monument-n477914
member of 'new' academia, 'space' archaeologist, advises 'mobs, barbarians and revolutionaries' how to destroy monuments, most build thanks the monies from charity and public money etc. and This archaeologist is proud of it too,and even is a Guggenheim fellowship recipient
https://twitter.com/indyfromspace
...

https://www.dailymail.co.uk/news/article-8407725/Hertfordshire-police-arrive-home-museum-curator-tweeted-destroy-bronze-statues.html
and here an art curator Oxford educated and working for a museum[sic!] who provided info to the mobs, barbarians, and 'revolutionaries' how to permanently damage bronze monuments