to their eternal shame and with a display of absolute gutlessness, ignorance and cowardliness the AMNC, with a nod and  support from Roosevelt's great grandson, has decided to remove the wonderful equestrian sculpture of Teddy Roosevelt - 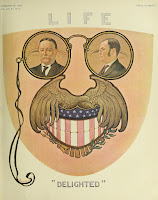 Who was Teddy - he was the 26th US president, faithful husband and father of family, anti-corporate crusader, American soldier, cowboy, NYC police commissioner, NY state governor, conservationist, hunter and a horseman, Nobel Peace Prize for his actions to end the Russo-Japanese War (when the prize  meant anything really - vide Obama PPr) etc - simple a true hero, in Joseph Campbell's way. Hence, the Teddy bear we all love as children - :)

Mr Teddy had a very strong personality, problems with health, but battled it all, achieved the utmost and on top was a prolific writer - his bibliography.

The monument was sculpted by a native Minnesotan artist James Earle Fraser  and is truly a wonderful, amazing example of  both representational and allegorical  masterpiece. 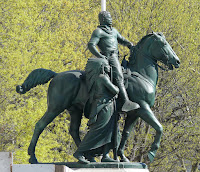 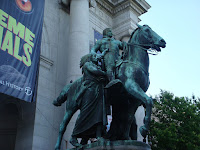 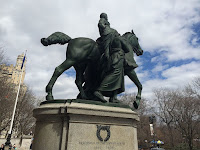 When I lived in NYC we used to frequent the museum usually almost every Saturday, as it was opened long and parking was easy to get in the afternoon (coming from Brooklyn), especially the cold months were great to do this when rained or snowed outside, while during the summer months it was great to sit by Teddy et company and eat some ice-cream or apple and watch the crowds passing by between  the museum and the Central Park.

you can read many of his works via Archive library -  like his fine four volume The Winning of the West .
Valete
Posted by Dario T. W. at Monday, June 29, 2020