Salvete Omnes,
100 years ago Polish, Ukrainian, Belarusian, and various 'White' Cossack forces battled the Red Army's onslaught that would be finally stopped on the flat plains of central Poland east of the Vistula River. Thus year is the anniversary of that famous battle of Warsaw.

I daresay  in the spirit of this anniversary Osprey Publishing released a book from the Campaign series by Steven Zaloga about the battle of Warsaw 1920.
I am thinking about  addressing some issues I have seen with this book, but no promises there.
In the spirit of this centennial campaign let us take a look at one of the Soviet artists who was in fact a soldier and portrayed the famous Budyonny  1st Horse/Cavalry  Army or Konarmia of the Russian Civil War. 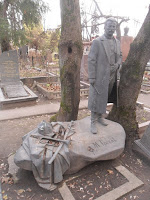 Artist-  Mitrophan Borisovich Grekhov/Grekov (1882-1934) - volunteered to join fight the Red Army and being a solider  he drew and painted, from nature, the Konarmia cavalrymen and their horses. And their famous tachankas - machine gun placed on a carriage that was pulled by at least 2 horse team.
there is lots of  steppe vastness and horse sprit in these paintings 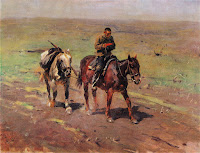 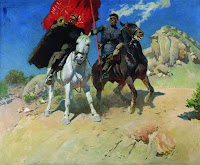 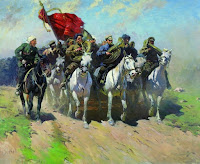 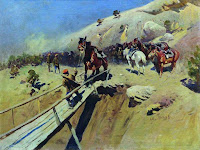 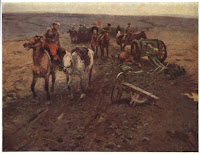 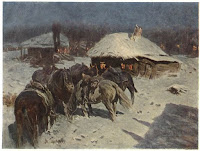