I love playing chess, and often the chess pieces are beautifully hand carved, painted and lovely to behold.
So making long story short I would like to bring to your attention the famous Romanesque period Lewis chess pieces, discovered on the Isle of Lewis, Scotland, UK in 1831, and it is thought to have been made in the XII century, when this part of Scotland was a Norse Kingdom of mixed Gaelic and Scandinavian traditions.

There are 11 pieces held at the National Museum of Scotland out of 93 pieces found, 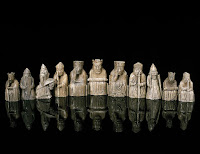 the remainder is kept at the British Museum in London, UK.
Most of them were made out of walrus ivory (perhaps from Greenland), and there is the dispute where the ivory  might have originated and where they were carved - Norway or even Iceland. The dispute has been very interesting, eg this article. Wiki also has an entry on this collection and Wiki Commons plenty many of photos and drawings of the famous chess figurines.
The hoard contained plenty many of knights - this article says 15 horsemen (so one seems to be missing).
In one of Dr David Nicolle's many Osprey books - Medieval Scandinavian Armies 1100-1300AD, there is some discussion about the information contained in the chess pieces and a plate (plate E) painted by Angus McBride. 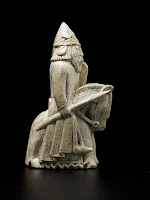 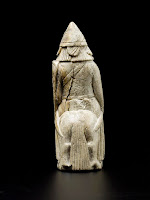 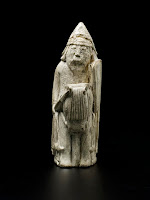 I could not resist to include the berserker as a warder 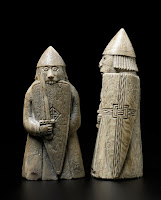