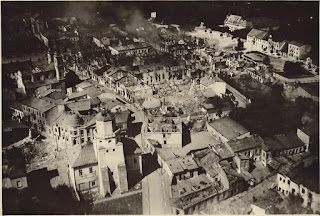 Salve,
as long as  I can remember in my family the today's date was associated with the tragedy of War World II and the annual beginning of school.

So on that fateful September 1, 1939 begun  the end of reborn Old Poland,  the rape, murder (Polish Jews  Holocaust, Polish Christians and other genocide) and pillage ( eg Polish art lost ) of that Old Poland (eg our landed gentry was obliterated completely and for ever). The war did not stop in 1945, for it lasted for good several decades until the Soviet Poland emerged as a homogeneous country in the late  1960s, when most of the Jews and Jewish communists ( the top apparatchiks of the Soviet Poland were mostly of the Jewish origin)  were forced to emigrate or voluntarily emigrated from the Peoples Republic of Poland (PRofP), and other non-Polish minorities were and still are smallish in numbers (eg Poland recognizes the right of the German minority in Poland, while the huge Polish minority in Germany is not afforded the status and their property taken in 1940 still has not been returned). I should add that the Polish Jews participated in the defence of Poland against the German invasion, and a hundred thousand were soldiers in the Polish army.
In the eastern Poland it was much different, the Jews ( communists and  poor rabble) and the Ukrainians and Belorussian peasants went against the Polish army and supported the Soviet Red Army. Multi-ethnic Polish state suffered a catastrophic failure during the 1939-45 period. In this photo even the religious Jews worked to defend Warsaw in 1939, going back to the days of Old Poland, where there were even units of Jewish soldiers defending the Polish-Lithuanian Commonwealth.

From the very beginning of war the Germans and Soviets set on obliterating the traditional elites of Old Poland - the gentry, and while the Germans were following Hitler's plans to eliminate the Polish nation, the Soviets created new elites out of 'their useful idiot'  men and women they either brought with them from within the USSR or found ready in the Soviet Poland etc.  Two  things were not destroyed - the Catholic Church and the land holding farmers-peasants. So while my ancestors being  good and prosperous farmers had gotten stuck in the category of semi-enemies of the PRofP, in the end they survived the Moscow lackeys and somewhat prevailed, until this European Union and liberal progress of today. But for now the old good farmer persists in Poland, and I am happy to report that one of my second cousins farms my ancestral farmland, and he is quite prosperous - God bless him and his family.

Ad rem, the war was the most cruel from the beginning, the power of the air force was used against the civilian population at will, Germans experimenting with their new machines - unfortunately no Picasso painted the horrors inflicted on the Polish town of Wielun and thousands of others. It was mayhem, chaos and destruction, it was horrifying and unlike any other war before - mind you the Central and Eastern Poland was the theatre of war during the World War I, with some 1 million Polish civilians dying during 1914-18.

During that September 1939 Poland had been betrayed by our allies, the British and the French, and later during the 1940-45 period they betrayed us some more ( eg the loss of the entire eastern part of the country, with the most Polish city in the world Lwów aka Lviv going to the soviet Union, its population forcibly removed into post-1045 Polish Republic). The most shameful was, in my opinion, the last act that took place after the end of the war, when His Majesty Labour  government refused  to allow Polish army-in-exile soldiers to march in the victory parade in 1946. And nowadays, since 2004 some 1 million Poles settled in the UK, with Her Majesty government's blessing - the irony of history. Or perhaps the 1946 British government was right on that we, Poles  lost the war, being occupied by one of our 1939 aggressors, and thus the soldiers who fought in the Battle of Britain et al., were actually losers. 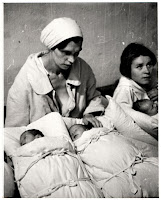 Julien Bryan, who took many photos of besieged capital of Poland, wrote about the story behind the above photo taken during that September 1939 in 1959:

During one air raid in those tragic two weeks of the siege, I took shelter in a maternity hospital. Huddled on the cold stone floors of the basement were 50 mothers with their infants. Some of the mothers bore shrapnel wounds received when the hospital was shelled by the Nazi guns ringing Warsaw. It was there that I photographed a young mother with her twin boys. That mother, Mrs. Balbina Szymanska, came to the Express offices to meet me. She said that the boys and their father had been killed during the 1944 revolt, when the Poles, at the bidding of Radio Moscow, rose against their German conquerors. The Red Army failed to come to the aid of the Poles, and the Nazis crushed them ruthlessly. During Mrs. Szymanska's absence from home, on September 5, 1944, a shell blasted their house, killing the twins and their father. It was the boys' fifth birthday. She has remarried and now has three children by her second husband.
By the way, famous Leni Riefenstahl with the German troops in the invaded Poland of 1939, she was supposed to make a film about this campaign, but upon seeing the massacre of Polish Jews in Konskie allegedly changed her mind. She did film the German victory parade in Warsaw on October 5, 1939.

My dear grandmother recalled long columns of Polish refugees during the hot days of September 1939 and the German Luftwaffe or air force bombing and machine-gunning the civilians in their horse-draw cars and automobiles.  My paternal grandfather, his cousins, and my other grand-uncles  already mobilised with the Polish army (within armies 'Łódź' and 'Poznań') would fight their first war and lost it, while  for my grandpa the war last for more than 6 years of fighting  (including almost two years in a prisoners' camp).

That war makes me think about horses, obviously, especially  since all three attackers on Poland'39 - namely Germany, Soviet Union (since September 17 onwards) and Slovakia[sic!], used hundred of thousands of horses, and the Polish military also used hundred of thousands as draft animals and cavalry horses. My great grandparents bred horses for the army prior to 1939, and their blood stock was confiscated by the Germans in the wake of the German invasion of Soviet Union, when the Germans need all the horses they could take. 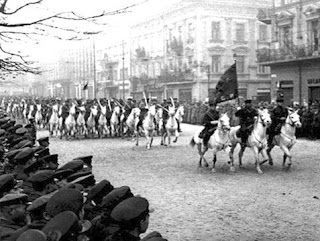 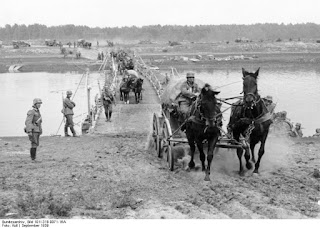 But nothing symbolizes the war more than this photo, colourized lately (I do not know by whom and when, got it off the net), showing a Polish cavalry horse killed in 1939.

... just thinking about these tragic moments and perhaps tonight I will light a candle and remember the fallen (including my great uncle).
Posted by Dario T. W. at Tuesday, September 01, 2015

your article about the Warand the misery it brought to your country is excellent. Poland as a flat agricultural country has always been an easy trophy of the neighbours. I saw in youtube an excellent video for the draggon polish army mounted on Shagya horses. I think they worth a post !