Salve,
a book has been published on the famous Konik Polski by a Duch researcher Cis van Vuutre (paper here), also an author of a study on the auroch.
From the publisher's page (Semper):

Cis van Vuure studied forestry at Wageningen University, the Netherlands. In his study he also focused on zoology and nature conservation. A part of his study he spent at the Mammal Research Institute at Białowieża, Poland. There, not only he got interested in historical zoology and the Holocene historical landscape of West and Central Europe, but also in Polish language and history. After his study he was active in e.g. nature conservation, grazing experiments and historical zoology. Developments and perceptions in these fields stimulated him to make a study of several aspects of the extinct aurochs (Bos primigenius), which was published in 2005. During and after this study, the mentioned developments also got him to study another large extinct European mammal, the wild horse, as well as an alleged descendant thereof, the Polish konik. The research into these horses resulted in a PhD thesis.
Konik Polski
''In the late 18th century, scientific interest in the European wild horse began to emerge. During the 19th century, various scientists published about the physical appearance of this animal, its range and habitat. After the discovery of Przewalski’s horses in Central Asia in 1878, this research was stimulated and broadened. Realizing that both the aurochs and the wild horse had become extinct in Europe, the German Heck brothers started to try and breed back these species during the 1920s, to show the people how they looked like. During the 1930s, the Pole Tadeusz Vetulani started to breed back the European wild horse, too. For this, he used certain farm horses. The Polish konik, being the breeding result of Vetulani’s experiment, became well‐known by the paraphrase ‘the most recent descendant of the European wild horse and the one that most resembles it.’ Personal doubts about these allegations, on the part of the author of this book, were the actual reason to start a research into the backgrounds to both the European wild horse and Vetulani’s breeding experiment, and the perceptions surrounding them. To learn about the wild horse, as much original source material as possible was gathered; in this way, several interesting, still unknown and unused sources were found. To learn about Vetulani’s breeding experiment, as much data on this as possible were gathered, to be able to analyse it minutely. The picture of the European wild horse, that now comes up from this research, is more complete than ever before. It turned out to be possible to give a broad outline of the physical appearance of this animal and its habitat. The research into Vetulani’s experiment yielded an analysis that is not only more elaborate than previous ones, but also deviant from the common version told until now. The doubts mentioned above showed up to be well‐founded.'' 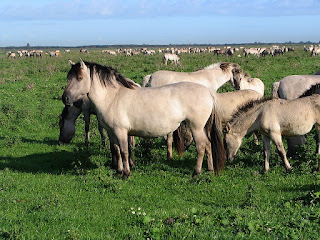