Salve,
this great horse lancers versus reiter cavalry and pike infantry battle took place 410 years ago near a town of Salaspis (then Kircholm) in Latvia (then Livonia).
Forces were not large - some 11-12,000 attacking Swedes (mostly infantry with 2,500 cavalrymen - numbers after Mariusz Balcerek) and 3,5 (most historians, eg Henryk Wisner ) to 9,000 defending Polish Crown army ( numbers by Radek Sikora - see link below), mostly cavalrymen with their camp servants (including 1,000 infantry Polish) plus some 400 reiter cavalrymen from the Duchy of Curland.
Perhaps a little comment of the nature of this conflict - well, it was really a dynastic dispute between two royal members of the Swedish Vasa House over the throne of Sweden et al., Polish Commonwealth ruled by the rightful heir to the Swedish throne and Sweden ruled by his uncle and usurper who won over the country in a coup.
It was one of the most famous battles won by the Old Polish art of war, mostly based on the combined use of all available forces with the winged hussars acting as the armoured fist of the army, hammering the enemy until they were defeated. Hence, this battle is recognized as one of the greatest triumphs of the winged lancer of Old Poland.

Here a period print from the Poland's National Library - via the Jan III Sobieski museum at  Wilanow Palace site.
His Royal Highness Sigismund III Vasa army was led by one of those miltiary geniuses that happened in the Polish Commonwealth during the XVI and XVII centuries in abundant numbers - Jan Karol Chodkiewicz,   the Duchy of Lithuania grand hetman. perhaps one day I shall quote some from his writings. 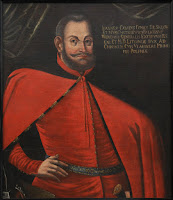 Ad rem, the pitched battle was most violent and as usual in the period before the machine guns and modern artillery and tanks, most causalities occurred during the retreat and confusion caused by the retreating Swedish cavalry - the Charles IX army was drawn into the battle by Chodkiewicz's stratagem  into a trap, bludgeoned with the mighty armoured blows delivered by the Polish-Lithuanian charging cavalry columns (Woyna, Lacki, Sapieha, Dąbrowa) and finally disintegrated under the thrusts of  the Polish-Lithuanian winged hussars' lance points, estoques, sabres and pallasches.
God had mercy on their souls for the winged hussars had none.

Radek Sikora, Polish winged hussars historian and reenactor, wrote an interesting article on the battle (in Polish) -  on Wp.
Another article (Polish) by Kuba Pokojski from Signum Polonicum re-enactment group - author of a new book on the battle of Tczew AD 1627.
Kadrinazi blog - articles on Kircholm are more than a few. eg on the fallen soldiers. 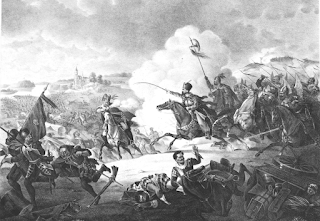 This engagement is pretty much similar to the famous Classical  Antiquity battle of Cannae, and was called Small Cannae - (Małe Kanny).

Popular artists of the early XVII century, Flemish Peter Snayers painted this battle, and the famous painting, shown at the beginning of my post, can be viewed in detail - from hussar.com.pl gallery

ps
an artist  copying a detail from Wojciech Kossak's painting of this battle - speeded video of work done in soft pastels.
ps'
I still wonder why Osprey has not published a book on this amazing engagement.
Posted by Dario T. W. at Sunday, September 27, 2015

Warfare is a fascinating subject. Despite the dubious morality of using violence to achieve personal or political aims. It remains that conflict has been used to do just that throughout recorded history.

Your article is very well done, a good read.

Thank you for your visit and comment! Much appreciated