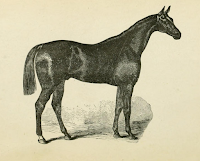 Salve,
have posted anything about the horses lately, then it is time to change this pattern - :) , so from the XVIII century horse literature classic comes this definition of a bit:
The title -  'The Farriers's and Horseman's Complete Dictionary: Containing the Art of Farriery in All Its Branches; with Whatever Relates to the Manage, and to the Knowledge, Breeding, Feeding, and Dieting of Horse' by  James Williams et al ,  1759. 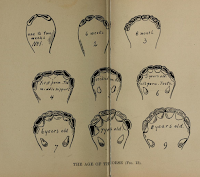 *''BIT, or Bitt, or Horse-bitt, in general, signifies the whole machine of all the iron appurtenances of a bridle, as the bit-mouth, the branches, the curb, the sevil-holes, the tranchefil, and the cross chains: but oftentimes it signifies only the bitmouth in particular.
The bit-mouth is then a piece of iron forged several ways, in order to be put into a horse's mouth, to keep it in subjection.
Of these bit-mouths, some are single cannon mouths, some are cannon mouths with an upset or mounting liberty, some scatch mouths, some mouths after the form of a barge. Some with two long turning olives, and several other sorts, all with different liberties for the tongue, or without liberty. But all bit-mouths ought still to be proportioned to the mouth of the horse, according as it is more or less cloven or wide; or more or less sensible and tender, according as the tongue and the lips are higher or flatter, and as the palate is more or lest fleshy ; observing withal, that if the horse be old, the palate will always have but little flesh upon it. Guillet.
It is the opinion of the Duke of Newcastle, that as little iron as possible should be put into the horse's mouth; and we seldom use any other than snaffles, cannon mouths jointed in the middle, cannon with a fast-mouth, and cannon with a port mouth, either round or jointed.''
"As for the bits now in use, besides the snaffle or watering bit, there is the cannon mouth jointed in the middle, which M. Solleysell affirms to be the very best of all, because it always preserves a horse's mouth whole and sound; and though the tongue sustains the whole effort of it, yet it is not so sensible as the bars, which are so delicate that they feel its pressure through the tongue, and thereby obey the least motion of the rider's hand. The longer it is towards the ends fixed to the branches the gentler it will be. We should make use of this mouth to a horse so long as we can; that is, if with a simple cannon mouth we can draw from a horse all the obedience he is capable of giving, it will be in vain to give him another; this being the very best of all.''
The cannon with a fast mouth is all of one piece, and only kneed in the middle to form a liberty for the tongue. This bit is proper to secure those mouths that chack or beat upon the hand ; it will fix their mouths because it rests always in one place, so that deadening the same in a manner, thereby, the horse loses his apprehensions, and will soon relish his bit-mouth better than the last, which being jointed in the middle, rests unequally upon the bars. This however because not jointed in the middle is more rude. The middle of this bit should be a little more forward to give the more play to the horse's tongue, and the bit should rather rest upon the gums or outside of the bars than upon their very ridges.

The fourth sort is called the cannon-mouth with the liberty after the form of a pigeon's neck. When a horse's month is too large, so that the thickness thereof supports the mouth of the bit, this it cannot work its usual effects upon the bars; this liberty will a little disengage it, and suffer the mouth of the bit to come at and rest upon his gums, which will make him so much the lighter upon the hand.

The port-mouth is a cannon with an upset or mounting liberty proper for a horse with a good mouth, but a large tongue; having its effects upon the lips and gums; and because the tongue is disengaged, it will subject the horse that hath high bars, and in some degree sensible.
The scatch mouth with an upset or mounting liberty is ruder than a cannon mouth, because not fully so round, but more edged and preferable to them in one respect, which is that those parts of a cannon mouth to which the branches are fastened, if not well riveted, are subject to slip: but the ends of a scatch mouth can never fail, because of their being over lapped, and therefore much more secure for vicious and ill natured horses.
Some are of opinion, that the best  way to sit a horse exactly with a bit, is to have a great many bits by them, and change till they hit upon the right: but at first, be sure to let him have a gentle one, rightly lodged in his mouth, so as not to frumple bis lips; or to rest upon his tushes. Then  let him be mounted, and pulled two or three steps back, whereby you will know if his head be firm, if he performs frankly, or only obeys with reluctancy, that so you may give him another bit, which may gain his consent. If he inclines to carry low, you are not to give him a liberty for the tongue, which will rise too high ; for that by tickling his palate, would bring his head between his legs.'' Sportsman's Dicit. in voc.