Salve,
some time ago in June I mentioned this anniversary - 718 years since white eagle (aquila)  was officially adopted as Poland's national emblem.
Eagle has been the symbol of  states and tribes and clans since time immemorial, Greeks, Romans, and Scythians, just  to name the few. In ancient Greece and  republican Rome  eagle was the companion of Zeus and Jupiter, carrying their thunderbolts, one of the symbols of the Roman Republic. With these divine thunderbolts in his claws eagle also became  the symbol of Imperial Rome, and the symbol of Rome's legions. Imperial Byzantium had a two-headed eagle as its symbol (according to Konopczyński it derives its symbolic two heads from Roman god Janus), while Charlemagne had his palace in Aachen adorned with a large image of the royal raptor. It would eventually  became the symbol the the Holy Roman Empire. (in 1410)
During the high Middle Ages the lands of central and south central  Europe, from Modena, Karniola, and Serbia in the south , through Tyrol, Bohemia, Moravia, Holly Roman Empire and lands of Polish principalities eagle would become the principal image in their coats of arms., while in the north and west image of the lion would dominate.
In Polish history - the Piast state - the first image of an eagle come from a denarius minted by our first king Bolesław  the Brave, while the first mention to the eagle may come from Gallus Anonimus, the author of his 'Gesta principum Polonorum,' who  wrote in the early XII century that Polish troops carried victorious signs.  Wincety Kadłubek, another chronicler and author of the first use of a 'res publica' term for  Poland, wrote that in 1182 our duke Kazimierz II's troops carried ''the signs of a victorious eagle, symbol of royal majesty,'' in the battle against the Kievan Rus troops at the battle of Brest in 1182., so during the Period of Fragmentation various Piast dukes and princes adopted eagle as their heraldic symbol,  first in Silesia, then in Lesser Poland and Greater Poland, later in Kujawy and Mazowsze.
First it was duke of Wrocław Henryk IV Probus who already possessing  the heraldic symbol of black Silesian eagle,, added white eagle, but without a crown, as his second heraldic symbol  in 1290, when he took the throne of Krakow and Lesser Poland.  A month later he had the same eagle, but with a crown on its head, on his seal.
Upon Henryk IV's death, his successor,duke of Greater Poland and Gdańsk Pomerania , Przemysł II took, as per his agreement with Henryk IV,  the throne of Kraków and with it the heraldic symbol of the royal seat - White Eagle. It has been determined that the eagle was white, with a gold ribbon across his wings and chest in the fashion of the Silesian eagle, and its heraldic shield/field  was red/crimson.

I started this project - drawing king Przemysl II in his most royal appearance, most likely mounted, on a fully caparisoned horse. 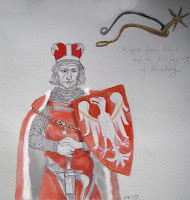 sources
.. from National Archives at Kraków :
Duke Henryk IV Probus - with Silesian eagle on his shield - a drawing from his tomb

.. Henryk IV  Probus from his sepulchre - coats of arms on Poland and Silesia 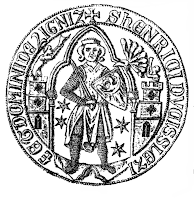 ..Bolko I of Świdnica-Zębice - particularly splendid effigy of this Piast prince 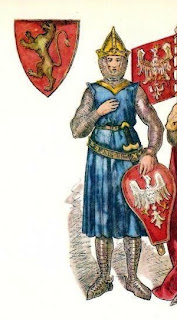 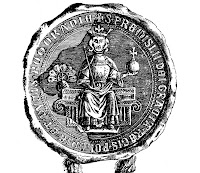 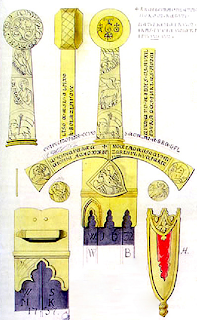 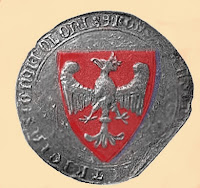 to be continued
* into to Polish heraldry on Wikipedia

Ps
also, Sept 8  is an anniversary of the Orsza victory(Orsha battle) fought between the Lithuanian-Polish forces under knez Ostrogski (Kanstancin Astrožski ) and the Grand Duchy of Muscovy army under Chelyadnin and Knez Bulgakov-Golica in 1514.  The battle is famously depicted in the Orsza painting (National Museum in Warszawa), one of the most important iconographic sources to the period; please note that early Polish hussars (based on the Serbian and generally speaking Balkan mercenaries) are depicted in the painting.
A song celebrating this victory in Belarusian - (and lyrics)
another song (in Belarusian)