Salve,
last week while at a neighbourhood bookstore I read some of the articles in the Ancient Warfare magazine - you can always find some great article or two, or three there (or more, it is quite a dedicated publication - although Desperta Ferro from Spain is my favourite).

I was reading one of the articles by this quite interesting author, Annelies Koolen from Holland, titled 'Athenian cavalry in Sicily - An underestimation of the enemy’s cavalry'.
In that article there was an illustration of a Beotian sculpture (from Thespiae) or relief showing a cavalryman/rider on horseback from Athens' Archaeological Museum, all was quite fine except rider's head was missing.

I sketched a drawing based on that sculpture, and added a bit and reins, but not the bridle... 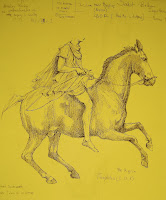 There was another article there on the Alexander's victory at Grannicus river, and perhaps I will write about this article in the future.

Also, a quick sketch based on a pot of one of the gretest ancient cavalry reenactors John Conyard from British reenactment group Comitatus, an association of ladies and gents who are fabulous in their zeal to reconstruct ancient warriors, their equipment and spirit. By the way many illustrations showing ancient cavalry etc are based on Comitatus  photos.
I salute these passionate people - Ave,  Comitatus! 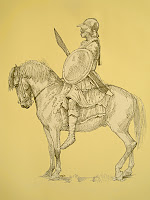 These sketches were done with Pentel's Hybrid Technica pens, while colors were added with GIMP (Ubuntu 12.04 for Painters OS )
Posted by Dario T. W. at Monday, September 09, 2013