Salve,
Sarmatian riders became famous because of their contact with the Classical world, mainly the Romans and their empire. Being nomadic dwellers of the Panonian, Pontic and Caspian steppes they had to have some good, well trained horses to be able to carry their riders against their enemies while often heavily armoured and armed, at least the elite warriors. 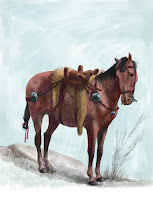 We know from  Strabo that they rode geldings, having castrated their colts. Strabo wrote that their horses were ''small, but exceedingly fast'' but ''difficult to control'' (for the Romans, I suppose).

Were the Sarmatian horses large, like the alleged Nisayan? Well, it does not appear to have been so, at least not from the sources, as evidenced by Starbo's description, or from the famous Trajan Column in Rome, where their horses are the same size as the Roman cavalry mounts. But they must have been strong and stout to be able to carry their bardings (scale armor)

Above a wikipedia photo of the pertinent section of the Trajan Column.

In Roman work titled ''Historiae Augustae,'' a collection of biographies of the Roman emperors from Hadrian to Carinus, we have an interesting story involving  a reputedly fast Sarmatian (Alan) horse and  emperor Probus (Ad 276-282), :

''Once, indeed, when a horse was found among the booty taken from the Alani or some other nation — for this is uncertain — which, though not handsome or especially large, was reputed, according to the talk of the captives, to be able to run one hundred miles in a day and to continue for eight or ten days, all supposed that Probus would keep such a beast for himself.

But first he remarked, "This horse is better suited to a soldier who flees than to one who fights,"  and then he ordered the men of the put their names into an urn, that the one drawn by lots should receive the horse.  Then, since there were in the army four other soldiers named Probus, it so chanced that the name of Probus appeared on the lot that first came forth, though the general's name had not been put into the urn.

And when the four soldiers strove with one another, each maintaining that the lot was his, he ordered the urn to be shaken a second time. But a second time, too, the name of Probus came forth; and when it was done for the third and the fourth time, on the fourth time also there leaped forth the name of Probus.  Then the entire army set apart that horse for Probus their general, and even those very soldiers whose names had come forth from the urn desired it thus.'' [David Magie's translation]

Finally,  we also know that emperor Hadrian had an Alan steed, used for hunting (thus a hunter), and he was called Borysthenes Βορυσθένης (Greek name for river god of Scythia and the Dnieper River). The name and information about this hunting horse survived because it was inscribed on its tomb at Apt, near Nimes, in present day France.
I have copied the poem, so pretty soon I will provide the entire poem with an appropriate drawing, gods willing - :)

I did this drawing on MyPaint, and this is a Sarmatian horse, that bears a tamga{owner's brand marking] on its hindquarters, a notched ear also indicated his owner, and perhaps it belongs to the Bosporan Kingdom horseman ( a Sarmatian monarchy mixing Greek, Roman and Sarmatian elements since the rule of king Asupurgus ), and his equipment is a mix of Roman and Sarmatian tack, and while his tail is tied in the steppe manner his mane is not crenellated.
Posted by Dario T. W. at Wednesday, March 27, 2013