first post in this nice month of September. Yes, it is the end of summer and beginning of autumn, fine time for horse riding or just horse watching :).

Just wanted to remind you that on  September 1, 1939 Republic of Poland was attacked  by Nazi Germany (aided by Slovakia) and Soviet Union (17th of September), beginning World War II. The ensuing war caused unprecedented slaughter of Polish elites, Polish Jewry, the destruction, pilage and robbery of Polish museums, art, archives, human resources and natural resources. While our allies stood idle. My grandpa Wincenty fought in the Polish army as a soldier during this war.

In the summer of 1939 when Nazi Germany demanded that Hungary open its borders to German troops and allow them to cross over to invade Poland, Hungary's Prime Minister Pal Teleky, he answered: 'I rather blow up our rail lines than [Hungary] take part in the invasion of Poland.' (confirmed by Regent Horthy who told the German ambassador that "he [Teleky] would sooner blow up the rail lines than to participate in an attack on Poland.)

Today's also happens to be the anniversary of the modern Thermopylae, not Greek but a Polish one, for about 720 Polish soldiers under cpt Raginis  entrenched near Wizna defended their position against the invading  42,000 strong German corps under gen. Guderian for almost 4 days (7-10 Sept.)  And Swedish band Sabaton wrote a song about this heroic event .

Nota bene Soviets and Germans destroyed Polish horse breeding (my great grandpa had bred horses for the Polish army prior to 1939, and his horses were confiscated in 1941 for the Hitler's adventure on the Plains of Russia). The invaders  killed the horses and breeders,  destroyed the private and state horse breeding, dispersed the studs, took horses as pillage and spoils (famous Soviet stud at Tersk was augmented with fine horses  with this rapine, eg  famous  stallion Ofir, his daugher mare Mammona)  one of the affected was the famous stud at Janów Podlaski. 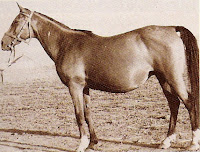 Accidentally, American Arabian horse breeders benefited from this rapine - gen. Patton got some prime Polish Arabians (theft really): of Kuheilan Haifi line stallion Witeź II (Ofir & Federacja ), stallion Opal and his son stalion Lotnik, and several mares (I do not know their names)  were taken to US, where they were bred with great success.

Wola'44
During the massacre of civilian population of Warsaw's district of Wola during the Warsaw Uprising '44, also a traditional home of thousands of draft horse, during the slaughter and  banishment of Wola inhabitants the German troops and the Police killed and starved to death thousands of these working horses and took some as the spoils, while some were eaten by the soldiers and civilians of the Warsaw Rising'44. 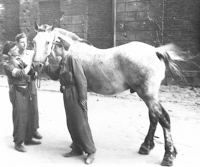 Horrors of war... from the Museum of Warsaw Rising '44 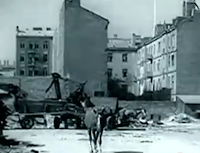 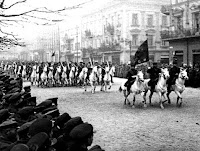 ...
sources - archival films and photos from Wikipedia and Youtube

*
By the way, I have to comment on this sudden outburst of Germany pursuing the last surviving Nazi SS-men, Nazi soldiers and their ilk (eg here), bah, only 68 years after the war!
So, let me demonstrate this drive for high moral ground by pointing to this example of  great  Justice where the  92 years old accused allegedly killed 1 [sic!] (one) Dutch resistance fighter,  but when Dutch courts sentenced this man to death (later commuted to a life in prison) in 1949  Germany refused to extradite him - :) .

Let's contrast the latest case of zealous pursuit of justice by the present German authorities with the case of the very  man who commanded the Wola Massacre - 60,000 killed, countless girls and women raped, so  Gruppenfüher Heinz  Reinefarth who was  awarded  the Oak Leaves to his Knight's Cross of the Iron Cross for his actions during Warsaw Rising'44 on September 30, 1944 ,  lived out his life peacefully  in then-West Germany, first being the mayor of a town, then a state parliamentarian,  finally a lawyer who retired with a grand pension and lived out his years in his manor, unburdened by  the genocide and crimes against humanity he committed.
Repeatedly democratic Republic of Germany refused to extradite this man to Poland, citing mostly lack of evidence (first request for extradition was refused by the Americans). Thousands of these German Nazi butchers lived their lives comfortably in democratic Germany, German justice ministry saw no problem with theses war criminals, perpetrators of Holocaust and genocide, rape, pillage and theft. But then post-war Germany was built by the pardoned and reformed (with light prison sentences) Nazi officials and soldiers. Polish writer and journalist Krzysztof Kąkolewski interviewed many of these criminals, including Reinefarth,  in West Germany in 1970s, and published a book titled 'How are you, sir?'.  There is also this East Germany TV film-interview with Reinefarth, made in 1957, titled  'Holidays on Sylt.'
Travesty of justice.
Posted by Dario T. W. at Saturday, September 07, 2013