Salve,
almost 15 years ago Richard Brzezinski published his two, now legendary, Osprey Publishing volumes dedicated to the armies of the Polish-Lithuanian Commonwealth. Volume two included an  overview of the so called Foreign Autorament where Western or German-dressed units were grouped. De Bruyn's engravings belong to Bathory's reign and foreign autorament of the Commonwealth army was reformed under king Władyslaw IV, but German-style cavalry was already  present during our Hungarian king reign.
Here it is worth noting that during Bathory's reign Ducal Prussia was firmly within the Polish control and being an integral part of the Commonwealth provided troops and volunteers for the Commonwealth cavalry and infantry units, along with Duchy of Pomerania and Silesia etc. By the way one of the most famous Renaissance Polish commanders, cavalry foray master, known as Terror Tartarorum Bernard Pretwicz came to Polish Kingdom from Sliesia.
Royal City of Gdańsk and Royal Prussia, and Upper Silesia also provided German-looking units for the Polish Crown while Livonia, Kurland and northern parts of Grand Duchy of Lithuania also provided German amred and often dressed units.

Here are de Bruyn's German horsemen - and it  seems to me that he was much more familiar with the subject.   Note muzzles and heavy bits, double reins, docked tails and heavier horses than previous two parts' plates. 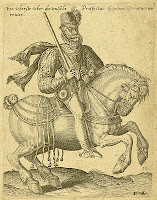 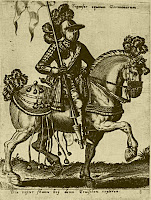 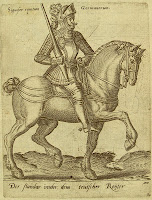 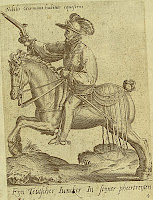 Michal 'Kadrinazi' blogs often about the reiter and dragoon units in the Commonwealth armies, sharing his research about these often forgotten units of Old Poland.
Posted by Dario T. W. at Friday, October 05, 2012

Thanks for mentioning my blog Dario :) What can I say - I'm just not much into husaria, I much prefer to dig for information about less known formations ;)

my pleasure Michal :) Besides we need more research on the other cavalry of the Commonwealth, not just the husaria - so I am eagerly awaiting your book :)