Salve,
I am going to throw in two sketches, or rather one digital 'painting' done in MyPaint from the beginning to the end (note, it is not finished 100%), with variations etc
First, I should again say that I cannot stop thanking the guys from MyPaint project, but lately my favorite part of the MyPaint brushes sets are the ones created by David Revoy - the V4 set - awesome brushes creating almost real tool feeling, be it watercolour, pencil or pens.

Ad rem,
at first I started with this a sketch of a horsman brandishing his sabre, sort of XVII century feel, Polish-Lithuanian Commonwealth or Hungarian. It started as all back silhouette, figure, and slowly I peeled some parts off and scratched some shapes on it, while playing with the horse etc.

Once the general look had been achieved, then it struck me that I did not like the clothing set, and that I should have shown  one of the quilted coats, so I proceeded to work towards that goal.
Here is the result thus far: 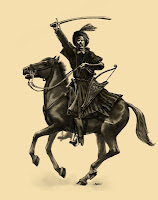 ps
Great article here - on the Saka princes of 2,500 years ago from Ukok Plateau in the Altai, Russia (Pazyryk kurgans come from that area too), with wonderful photos and reconstruction drawings and paintings (there are books by Ms Natalia Polosmak on the culture of the Ukok Plateau Saka). I am thinking about drawing the Saka woman on horseback, just to see how it all would look in my brushwork.
Posted by Dario T. W. at Friday, October 19, 2012