Salve,
I would like to begin by wishing good luck to my friends and family on the East Coast of the US, as the hurricane Sandy  landed there last night.

Going back to Abraham de Bruyn and his prints, today a set showing armoured lancers of the Western Europe:
..
Tournament harness 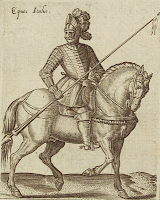 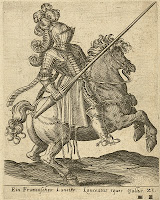 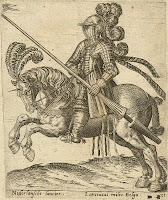 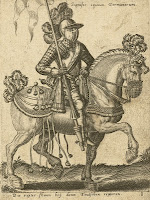 ..
Interestingly de Bruyn shows no Spanish heavy lancer but only two bullfighting horsemen  riding à 'la gineta' style and a herreruelo or a pistol-and-arquebus (wheel-lock) armed cavalryman. Also he shows a Belgian armoured commander of cavalry that fought for the Spanish in the war in Flanders.
a la gineta 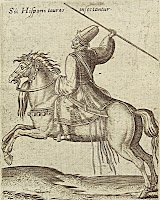 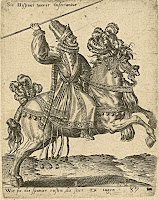 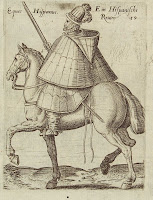 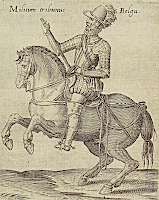 and finally a drummer, as no cavalry could have been without music 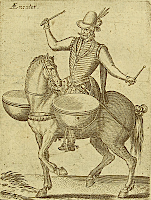 The "Spanish" cavalry serving in Northern Europe (Flanders, Germany and France) was for the most part made up of Italian or Flemish lancers together with light cavalry from mixed sources (I.e Spanish, Italians & Albanians) as well as the every present German Reiters.

As a rule the Spaniards prefered the infantry which was at the height of it's fame and let the "foreigners" perform the cavalry service. That is why numerous Spanish captains wrote about the infantry while two most important cavalry texts were written by an Italian (Melzo) and an Italo-Albianian (Basta)

Daniel, thank you very much for the information, and welcome to my blog! I have got to find the texts by Melzo and perhaps Basta. I admit freely I use your website from time to time :)