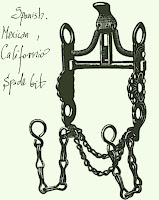 Salve,
yesterday I quoted the interesting observations  the famous British traveller Richard F. Burton made about the California saddle (1860).
Well, today I will finish his depiction with his critique of the bridle used along with the saddle:

"The bridle is undoubtedly the worst part of the horse’s furniture. The bit is long, clumsy, and not less cruel than a Chifney*. I have seen the Arab ring, which, with sufficient leverage, will break a horse’s jaw, and another, not unlike an East Indian invention, with a sharp triangle to press upon the animal’s palate, apparently for the purpose of causing it to rear and fall backward. It is the offspring of the Mexican ''manége,'' which was derived, through Spain, from the Moors."
as we know Sir Richard was not a cavalry officer (he served with infantry regiments), but as an English gentry, he most likely trained in fox hunting, riding horses with snaffle bits and using a typical flat saddle (aka English hunt saddle). He did not like or most likely did not understand the California spade bit - a 'form of curb bit with an exaggerated extension of the port that ends in a curved enlargement in the shape of a spoon' (Gehrad A. Malm, DVM, 1996:4). Also he did not understand that California horse tack was just simply a Mexican horse tack, that in turn was Spanish horse tack. He did not mention 'mecate' (horse hair reins) nor arduous training (involving hackamore, snaffle and finally curb bit0that horse underwent in order to be ridden in spade bit or ring- or Chileno bit (what he calls Arab ring, used to be called also a Morisco bit - in this link you can find one of the most knowledgeable horsewomen, Dr Deb Bennett giving her view on the historical use of curb bits/horse training equipment/method in the context of Spanish/Mexican/California versus Anglo-Texan horse traditions)


American William S. Tevis jr stated in his 1922 book "The Horse" :
''A horse is generally used in a hackamore for about a year, and then he is doublereined for another year. Double-reining consists in putting a Spanish bit bridle over the hackamore and allowing the animal to carry the spade bit in his mouth for this length of time. During this period, however, he is controlled almost entirely by the hackamore, and merely allowed to carry the bit in his mouth in order to become used to it and play with the wheel at the fore part of the spade, which has the tendency to keep his mouth wet.
The horse by this time should be completely bridlewise to the hackamore and by degrees this knowledge can be transferred to the spade bit, so that he will stop and turn by a pull on this bit and the feel of the reins on his neck.''
The best description, from a position of a working cowman and practitioner, of the hackamore to spade bit training can be found in Ed Connell's books, eg Hackamore Reinsman
The best description of working California vaqueros can be found in the works of Arnold R. Rojas, collected in These were the Vaqueros.
Professor Robert W. Miller wrote, in "Western Horse Behavior and Training" (1975:139-41) that spade bit is  'one of the most misunderstood curb bits.' He says that "a good spade bit, properly fitted to the horse and properly handled, is just the opposite of being cruel. It is really designed to keep  horse very light and soft mouthed." But "it takes considerably more time  and patience to train a spade bit horse."
Sir Richard was not a spade bit rider nor Morisco bit rider, he was a snaffle rider, and thus his biased opinion above, shared then by many who had no clue about its proper use. The bad legend of these types of curb bits continue today.
*Chifney bit: 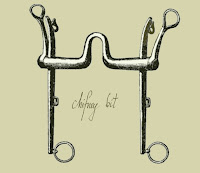 as described by 'my' trusted XIX century expert in hippology Captain Matthew Horace Hayes (Riding on the Flat and Across Country, 1891):

The celebrated Sam Chifney, who fell into disgrace with the racing public, on account of having been suspected of intentionally losing a race at Newmarket on the 2oth October, 1791, when riding the then Prince of Wales's horse, Escape, invented this form of curb, in which the objectionable downward pull on the headstall is entirely dispensed with; for its headstall is attached to short arms, that revolve on the mouthpiece, independently of the cheeks of the bit, to which the curbchain is hooked.
The Chifney bit is very severe, and is inapplicable to most horses that are ridden by men with indifferent hands; for its curbchain alone resists the forward action of the upper arms of the cheeks of the bit. Thus, the whole of the pressure falls on the gums, tongue and under part of the lower jaw, and none of it is taken, as with the ordinary curb, by the animal's poll, which, I need hardly say, is not as sensitive as the parts just named.
(drawing above come from Cpt. hayes book)

The Chifney bit is provided with a joint at the junction of the lever and mouthpiece, so that the action of the former is not confined by the head of the bridle. But though in theory this is all very pretty, in practice it is found to be of no service whatever. 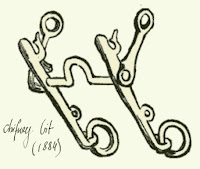 as described by  Elizabeth Platt Karr (1884)
The Chifney bit is another very severe one, and is very useful in managing a horse that pulls hard. But if the animal have a tender mouth, this bit should be used with great caution, and not at all by an inexperienced rider.
(image comes from Ms Platt Karr book)

ps
my son has been working on his own blog - being almost 11 years old he is very interested in mythical creatures, dinosaurs and zoology while inventing his own creatures.
Posted by Dario T. W. at Wednesday, April 04, 2012