Anatomy of a spade bit

Salve,
Wednesday I quoted Richard F. Burton's opinion on the western bit as he saw it in 1860, and then mentioned various authors 'talking' about the spade bit, so today let me show you the drawing depicting various part of spade bit - sort of an anatomy of this horse bit, in a drawing: 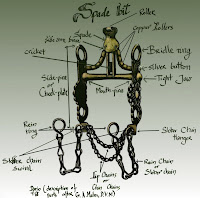 And here some more of Sir Richard's opinions on Western tack of the cavaliers he encountered on his trek, some comparisons with other cultures:


"The equipment of the cavalier excited my curiosity, especially the saddle, which has been recommended by good authorities for military use. The coming days of fast warfare, when “heavies,” if not wholly banished to the limbo of things that were, will be used as mounted “beef-eaters,” only for show, demand a saddle with as little weight as is consistent with strength, and one equally easy to the horse and the rider. In no branch of improvement, except in hat-making for the army, has so little been done as in saddles.
The English military or hunting implement still endures without other merit than facility to the beast, and, in the man’s case, faculty of falling uninjured with his horse. Unless the rider be copper-lined and iron-limbed, it is little better in long marches than a rail for riding. As far as convenience is concerned, an Arab pad is preferable to Peat’s best.
But the Californian saddle can not supply the deficiency, as will, I think, appear in the course of description.
The native Indian saddle is probably the degenerate offspring of the European pack-saddle: two short forks, composing the pommel and cantle, are nailed or lashed to a pair of narrow sideboards, and the rude tree is kept in shape by a green skin or hide allowed to shrink on. It remarkably resembles the Abyssinian, the Somal[Somali], and the Circassian saddle, which, like the “ dug-out” canoe, is probably the primitive form instinctively invented by mankind.
It is the sire of the civilized saddle, which in these lands varies with every region.
The Texan is known by its circular seat; a string passed round the tree forms a ring: provided with flaps after the European style, it is considered easy and comfortable."
Nota bene, Burton, when in British service in Indian during the 1840s, bought and rode a native bred Indian horse Kattywar (or Kathiawari), when his fellow officers were buying much more expensive Gulg Arab 9Persian bred) horses.
Here is the description in his own writings: ''it was a bright dun, with black stripes and stockings, a very vicious brute, addicted to all the sins of horseflesh, but full of spirits as a thoroughbred. Master and horse got along thoroughly well.'' (after Edward Price, Captian Sit Richard Burton, the Secret Agent who Made the Pilgrimage to Mecca, Discovered the Kama Sutra, and Brought the Arabian Nights to the West")
More on Kattywar/Khathiawar from Captain M.H Hayes (image from his book): 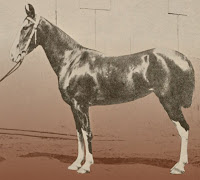 Photo above, some 50 years after Sir Richard,''...shows us a typical Kathiawar mare. She is a "three-cornered" animal; but having been brought up among rough surroundings, is capable of enduring much privation and hard work; though necessarily slow on account of her body being much longer than she is high at withers or croup. Her body is also very long compared to its depth. She is "calf-kneed," "sickle-hocked," and slightly tied-in below the hocks. As compensations, her shoulders are fairly well shaped; her fore arms and gaskins are strong; and her "bone" below the knees is good.''
General depiction of the East Indian horse by cpt Hayes:  The native horses of India are of the smart, wiry sort. As a rule, they are best when they do not exceed 14.1 or 14.2 [hands]; for the more they overtop this height, the "weedier" do they become. Having light fore hands and well-sloped shoulders, they are clever and jump well. They have excellent feet. Their legs, though capable of standing a great deal of work on hard ground, are often, from errors of breeding and bringing up, misshapen; so that turned-out toes, calf-knees, cow-hocks, and sickle-hocks are of frequent occurrence among them. Generally, they are flat-sided and light in the loin. Consequently, they are poor weight carriers, and bad stayers at fast paces; but are marvellously good at enduring fatigue and privation. The best of them make capital light cavalry horses up to, say, 13 stone 7 lbs. Although they are not as strong or as goodlooking as Arabs, they are probably hardier and better suited to endure hunger and thirst. Many of them, especially if they have a dash of English or Arab blood, have a fair turn of speed, and consequently make good pig-stickers and polo ponies. Indian racing ponies, which have a strong infusion of English blood, are, speaking generally, about 14 lbs. worse than Arabs of the same height, and particularly so over long distances. At fourteen hands it would be difficult to "bring them together" with English ponies in a race for, say, a mile. Without the constant importation of fresh blood from England, it is impossible in India to breed horses fit for racing, or for the requirements of English cavalry and artillery: even then, the results are very poor.