Salve,
with archive.org and google books I found more information on the Hungarian saddle, topic already started here. This time is comes from a book by a former Duch cavalryman Jean Roemer (here some recollections on the professor Roemer from the faculty of the City University - New York), who wrote his interesting work (almost mid XIX century) titled:
Cavalry: its History, Management, and Uses in War
Let us start with a depiction of the cavalryman and his mount versus the saddle:
''....the cavalry soldier places everything needed for himself and horse upon the saddle ; not because the weight thus becomes lighter for the horse, but because distributed on a larger surface, and snugly stowed away, it is easier for him to bear, and leaves his rider a freer use of his arms in combat. The requisites of a good saddle are the greatest lightness combined with the greatest solidity, a perfect fit to the horse's back, a firm and easy seat for the rider, and proper accommodation for the equipments, so as to allow their equal distribution in respect both of bulk and weight. The great fault in military saddles is their excessive weight and bulkiness, which imperfections are not always redeemed by a corresponding solidity. The number of horses rendered useless by sore backs tells fearfully against their construction, while bad riding also is too often owing to the clumsy seat, which in many cases allows the man to stick to his horse, not by means of his saddle, but in spite of it. Now, if the rider cannot keep a steady seat, he will certainly wound his horse, however well the saddle may fit. A bad seat is, therefore, a second cause of that bane of cavalry, sore backs, which, again, are not seldom occasioned by an injudicious method, or, what is worse, a want of method, in packing the effects upon the saddle.''
The light cavalry Hungarian saddle, with a drawing:

"The saddle most in use among the light cavalry of Europe, is the Hungarian tree, whose general introduction may be accounted for by the numerous hussar regiments which at one time were gotten up everywhere in Hungarian fashion; and we regret to say that most of its original merit has been lost, owing to the gradual changes successively introduced with a view to improvement. The Austrians and Russians, however, have departed less than any other nation from its earliest form, and the saddle now in use among them, and represented in [drawing above], is thus described by General McClellan: "It is of hard wood, entirely uncovered, and consists of the bars c, the front fork a, the rear fork b, and the saddle seat or strainingstrap d. The ends of the forks e, e, are let into mortises in the bars, and secured by raw-hide thongs passing through mortises p, p. The saddle seat, or straining leather, is a stout strap of leather from 11" to 13" inches long, 4" inches broad at the hind fork, 3" to 4 in the middle, and 2" to 3 at the front fork. It is secured to the front fork by four flat-headed nails, a strip of leather being first laid over the end of the strap, as seen at f."

"As the greatest strain comes upon its junction with the hind fork, it is secured to it differently. At each angle of the strap a stout thong is left when cutting it out; this thong is passed around the neck of the fork, and secured by a nail in rear; five flat-headed nails are then driven through the strap into the fork; under the head of each nail a round piece of leather is placed to prevent the strap from being cut or worn; f shows this arrangement. The strap is attached to the bars by rawhide thongs, as shown in the figure. The forks are strengthened by light iron plates nailed to front of the front fork and rear of the hind fork. The girth is attached to the bars by thongs passing through the holes g. The stirrup leathers pass through the mortises h, and in the notch m, a groove being cut in the under surface of the bar to receive the leather. The holes i, are for the purpose of attaching the straps which secure the holsters; those at k, for attaching the crupper. Near the upper end of each fork is a mortise; that in the front fork to receive the cloak strap that in the rear fork to receive the valise strap. The girth is of leather, 3" inches broad, and fastened by a large buckle on the left side."

Allegedly saddles were used without any saddle pad in Hungary by the peasants (as stated by Roemer in the following fragment), and curiously he makes no mention about the Hungarian 'cowboy' or  the 'csikos'* (Roemer was on the Marshall Radetzky staff in the late 1830s/early 1840s, before the Hungarian revolution of 1848, yet perhaps shared his commander's dislike towards the Hungarian patriots, being himself really without a country) - and here we have an image from 1846 that clearly shows that there is a saddle pad under the clearly Hungarian saddle of this puszta csikos: 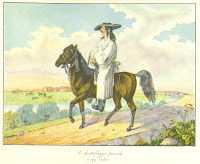 ''In Hungary the peasants use this wooden saddle on the bare backs of their horses, and in the French service they have made experiments to the same effect. As long as the horses kept up their condition, it was found to answer very well, but on long marches and in difficult country, when the horses fell off in flesh, they were invariably wounded by the contact of the wooden edges with the bare ribs.''
I should add that the csikos rode horses often bareback and were famous for the Hungarian post - 5 or more harnessed horses driven with the 'driver/rider' standing on the last pair of horses and driving them all- (Hungarian version of Roman riding) (here is Hungarian or here Roman riding- examples).
Then he goes to add that,  outside the French army, all use some padding under the saddle tree

''For all these reasons, the Hungarian saddle is still everywhere used with some medium between it and the horse's back, generally a blanket, folded in twelve or sixteen thicknesses, or better, as the Russians have it, placed on a tablecloth of stout felt, four layers thick, which number is increased or diminished according to the condition of the horse. On the march, the seat is usually covered with some article of clothing, and the whole with a shabrack of heavy cloth and a lamb's skin with the wool outside. This saddle recommends itself by its cheapness and lightness, and is also solid enough, provided it be made on correct principles and of good materials; otherwise, as may be easily conceived, the working of the wood and the stretching of the leather parts, especially the thongs, greatly disturb the seat of the rider.''

Here, more info for the Hungarian readers and those who want to see some images from Hungary showing horse tack, including the saddle and bridle, and clothes/costumes.
...
* I plan to do a little entry on the 'csikos' based on the XIX century literary depictions - some quite Romantic - :). and one day on the XVII-XVIII centuries Hungarian hussars ...

Hey would you help me identify a saddle we have in the museum?
I think it's a Hungarian type saddle, but it is dated to the 17th century.

Looks very much like the ones in the drawings you posted.

Do you have an email I can contact you on?

thank you for your comment
But yes, I do have email - written in the About Me section at the bottom right