Salve,
let me take you to XIX century southern Great Plains, where Spanish horses (later crossed with other American breeds ) had been used extensively and thoroughly since the colonization of Texas first by the Comanches and Kiowa  from the north-west and then by the Spanish from the south-west and eventually Anglo-Americans (including lost of German immigrants and some Polish folks) from the north-east. 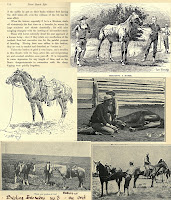 Love this article.. I should make a copy of an article from over 20 years ago.. I think, that appeared in Western Horseman Magazine that was about the kind of horses found in the old west.. very interesting article.. If I can find it that is.. lol

Maestro David, thank you kindly for your comment.
I'll try to bring some more of these 'pearls.' I have been reading this quite spirited biography of Charles Marion Russell - some interesting horsey points there :) . I did not know that on her mother's side he was a scion of the famous Bent family of St.Louis/Colorado/New Mexico, and a cousin to the Cheyenne warrior/historian Charles Bent. Anyway, if you like better quality images included in this 'article' just email me.

I used to do a show called the CM Russel Art Show up in Great Falls. I sat at a table with Jack Russel, Charlie's adopted son. He was a character. I'm sure he's passed away by now. He was old then and that was maybe 20 years ago.