Salvete Omnes
another short entry -
I would like to bring to your attention and invite you to take a look at this wonderfully rendered portrait of the Her Majesty Queen of France Marie Therese (1638-1683), queen-consort to Louis XIV (1643-1715), and their son Louis Le Grand Dauphin (1661-1711),  dressed in Old Polish costume, about two years since the queen bore their son.
The wedding of the royal couple was a great event between the Bourbon court and Spanish Hapsburg court, among other it was celebrated in many artworks, including prints, eg here they are portrayed together, or this entry into Paris).

Luis' birth was celebrated with the grand carousel, or a very courtly and sumptous equestrian display - perhaps in my next post I will point you to a number of prints produced in association with this equestrian parade. 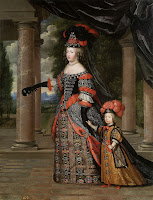 In this painting Marie Therese and little Louis were dressed up for a masquerade party where participants were dressed as Polish nobles.
More detail - queen and son

Louis alone, in his little Polish noble costume with a miniature war-ax

and finally a small print of Marie Therese on horseback 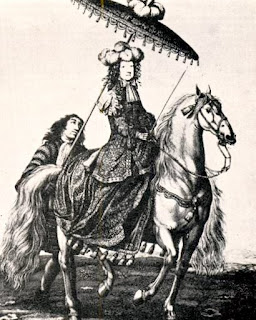