Salvete Omnes,
let us travel to the last quarter of the XIX century - and with this AD 1885 book by Randolph Huntington - History in brief of "Leopard" and "Linden," General Grant's Arabian stallions, : presented to him by the sultan of Turkey in 1879.[..]

we can revisit the two Arabian stallions and their progeny that His Majesty Sultan Abdul Hamid II of the Ottoman Empire gifted to President Ulysses S. Grant during his 1877-79  world tour.
Randolph Huntington was one of the early Arabian horse breeders in the US -  here there is a tribute to him - with many images of his horses.
Leopard 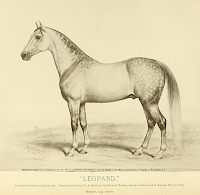 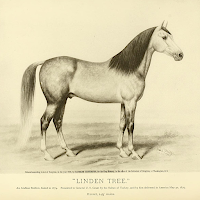