a short entry but before I go to the topic a little remainder and comment.
Namely,  this week there passed the 75 anniversary of the end of World War II (for the Soviets and post-Soviet states it was and is May 9, for the West it was and is May 8, 1945), it culminated with the capture of Berlin and German unconditional surrender.

Poles were part of the conquering Soviet Red Army 'fronts,' and Stalin allowed to raise our Polish flag over the Berlin's vicory column by the Polish army soldiers who took part in the conquest of Berlin.
The Soviet Union flag raising was documented with utomost care and pomp as a part of the Stalin's epic (more than 20 million of the Soviet Union citizens died in that war, while Poland was reduced from 35 million citizens in 1939 to little over  the 22 million in 1946)- some victory they could say, couldn't they?...

It was a great victory for the Soviet Union and USA, while Poland was left by the allies on the other side of the Iron Curtain, and then the citizen were outright robbed of their wealth, all in broad daylight and with the West blessing) in post-1989 'transformation.'
I am fond of Her Majesty the Queen Elizabeth II - after all she is a horse aficionado and  eg she still rode her horses before this corona calamity - and Friday she addressed her subjects to celebrate and commemorate the 75th anniversary, and to pay tribute to her father and her people.
Too bad Polish soldiers (after all Poland was attacked on Sept.1 1939 by  the Germany's Wehrmacht and on Sept 17, 1939 by Stalin's Red Army, and never capitulated, unlike France, or the Benelux countries) were not allowed to march in the Victory celebration in London back in 1946, it was politically incorrect, Britain already had the good Attlee's Labour government at the helm.

the Hungarian Plain with its puszta, animals(horses, sheep, dogs, and Hungarian Grey Cattle) and people(especially the Csikos) in the art of Karoly Lotz - 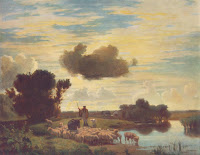