Salvete Omnes,
this year we commemorate the 75th anniversary of the Warsaw Uprising 1944 -

in 2013 I posted a short entry that combined 1939 invasion of Poland  and the Wola genocide'44 perpetrated by the Germans during the Warsaw Rising.

I have had the privilege to meet quite a few soldiers who fought during the Uprising.
When I lived in Brooklyn I was honored to befriend a young 80something years old Mr. Jan who was a Home Army soldier, and who along with his father, participated in the uprising on the right bank of the Vistula River, the Warsaw's Praga district. He was wounded during the fighting, taken prisoner and eventually ended up in the German camp, eventually to have been liberated by the American Army in 1945. He emigrated to the US and there he married,  fathered three children and lived to have many grandchildren. In 2004 Polish Republic founded his trip to Warsaw, to commemorate the 60th anniversary with the other surviving participants.

He had no regrets and was one of the most cheerful people I have ever met.

In my family, who lived just 60 miles to the south-west of the capital of Poland, the Uprising figured very deeply in the psyche of all who lived through and survived the war. Both my father, who was a a young boy then, and my grandmother remembered the glow of the burning Warsaw illuminating the summer and early fall nights of 1944. And the blackened skies and clouds of smoke coming from the direction of the fighting Warsaw. The glow and smoke would persist well into the fall of 1944, as the Germans were systematically burning and dynamiting  the left bank Warsaw.

My paternal grandfather was a Home Army soldier and that summer marched off with his unit to the fight the Germans during the so called Akcja Burza (Operation Tempest). Many years later he told me ''We failed to cross the Kampinos  Forest into Warsaw and to help the Home Army fighting there, we failed our  Warsaw and her citizens.''

My maternal grand-uncle, also a Home Army soldier,  fought during the entire 63 days of the Uprising, marched off into the German captivity and then returned to Poland to live in the Communist Respublica under the Soviet yoke - thanks to all the Tehran, Yalta and Potsdam Conferences our Western Allies made with butcher Stalin and his henchmen.
I have never met him, he died before I was old enough to have a meaningful talk about his war exploits.
I have been a student of the US Cavalry and Army in general during the Indian Wars, and one thing one notices in studding these little wars on the Plains, that the US military almost always held inquiries into the actions of the officers and NCOs when there had been a defeat or perceived lack of success. Court martial proceedings were not infrequent and documentary evidence remains plentiful  and meaningful. Consequently, I wish there would have been a trial of the commanders who stood behind the order to call the Uprising  -   in order to examine the alleged evidence of any wrongdoing and malfeasance. The Uprising was the outright 'gift' into the scheming hands of Stalin who was planing already his post-war Poland, while the Germans used this opportunity to go into the unspeakable levels of mayhem and deliberate killing and raping of civilian Poles, and into planned rapine, robbery, theft and destruction of the largest city in Poland.

Vae victis...and  Hail to the Heroes

this afternoon I did this pen sketch  - perhaps a future project 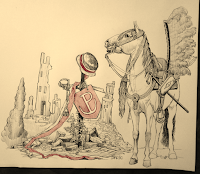 and the first concept sketch 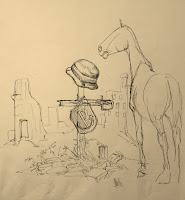 The Personal Notes and Diary
of
EUGENIUSZ MELECH
Written in English Before, During, and After the
POWSTANIE WARSZAWSKIE

Warsaw Uprising and the Women and Children of Poland

https://pl.wikipedia.org/wiki/Henryk_Leliwa-Roycewicz - uhlan, horseman and Olympic medalist who was a commanding officer during the Uprising - one of many great heroes
nota bene he miraculously escaped from the Soviets in 1939, thus avoiding being murdered at the Katyn Forest Massacre..