Salve,
today perhaps a little about our Polish winged hussars and their armor - via Radoslaw Sikora's book - 'Husaria w Walce'/The Winged Hussars in Combat - chapter on the hussar armor versus period's firearms p.30-52.
Winged Hussar armor, especially the breastplate, was 1.8 to 9 mm thick (winged hussar retainers wore  the thinner armor, naturally ), the center being the thickest, and was made from a piece iron worked over by a blacksmith or armorer. Perhaps the XVII century cuirass was of the best quality and thickness when comes to standing up to a pistol of musket shot, but the examples I am going to give have to do with artillery fire and its impact, which is most likely the extreme of the battle experience for any soldier.

There are more than several examples from the sources giving us a glimpse into their battle experience and life-saving quality of their armor versus the canonfire; so let me start  with the following event, rather gruesome and miraculous at the same time, from a hard fought engagement between Lubar and Cudnów that took place during the Polish-Muscovite war of 1654-69. 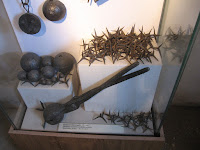 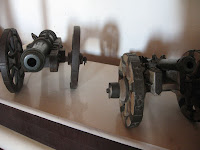 During the said battle an enemy cannon ball struck a breastplate of a winged hussar companion named Prusinowski[1], soldier of the Crown field hetman [Jerzy Lubomirski ] winged hussar company:
„[...] Prusinowski, towarzysz hetmana polnego [Jerzego Lubomirskiego] husarski, z armaty blachę zbroi na przedzie skruszoną miał; dziw wielki, kula ciała nie ruszyła [...]”
Prusinowski, winged hussar companion of the field hetman, suffered a damaged front plate of his armor that had been hit by a cannon ball [sic!]; [it was] a great wonder that the ball did not damage [his] body.
And then:
Pułkownik Leszczyński dodał, że dziura w zbroi Prusinowskiego była „Tak wielka, żeby ręka wcześnie się w nię skryła”.
Colonel Leszczyński added that the 'hole' in the Prusinowski's armor was 'so great that the hand/palm could hide in it.'
Hence, apparently pan Prusinowski physically survived this life-threatening  event to fight on.
In this case I am wondering whether his cuirass had a big concave indentation large enough for a cannot ball to fit in, and then a human hand to go inside, but the iron cuirass plate was not pierced and the ball being spent harmlessly fell to the ground? Or the cuirass was pierced by the cannon but somehow the cannonball stretched the plate and fell harmlessly down having been spent?
Pan Wespazjan Kochowski, a winged hussar companion, poet and chronicler, commented on this miraculous survival as being unusual, and in his writings he noted another exmaple of a winged hussar companion being struck by a cannonball onto his cuirass, but this time this companion named Komorowski was less lucky, the ball pierced his cuirass and he died - battle of Ochmatów, 29th  January- 2nd February 1655 during the Polish-Muscovite cum Cossaks war)

*
Twenty years earlier we have more examples of the quality of the armor used by the winged hussar:
30 sierpnia 1633 roku[2], w jednego z husarzy z roty wojewody smoleńskiego Aleksandra Gosiewskiego uderzyła kula armatnia. Zbroja wytrzymała to uderzenie, choć pozostało na niej wklęśnięcie. Kula ześlizgnęła się po zbroi i zgruchotała husarzowi rękę.
on August 30, 1633 an enemy cannon ball struck one of the winged hussar[companions] of the Smolensk Voivode Aleksander Gosiewski's banner. His armour withstood the hit, but it was dented/had an indentation where the ball hit. Then the slightly spent cannonball slid across the armor and ended shattering hussar's hand or arm.
Apparently this solider lived, albeit injured.

A different winged hussar[companion], this time from the  chorąży Michał Wojna's banner, was struck by a cannon ball at his head, protected with his winged hussar shishage helmet, so indeed the helmet withstood the direct hit by the enemy cannon, but the hussar's head did not, and so he was died instantaneously from the impact (Diariusz kampanii, pp.204-205).

The following images are from the Napoleonic period cuirass pierced by a cannonball - mass produced cuirass  of the French cuirassiers and carabiniers (Waterloo 1815) - poor carabinier-à-cheval named François-Antoine Fauveau age 23 was the wearer of this armor. 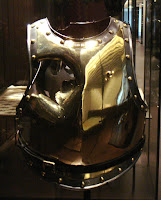 two Gipsy/Roma delinquents almost burned down this castle in 2012 http://spravy.pravda.sk/regiony/clanok/211485-hrad-krasna-horka-zdevastoval-velky-poziar/

Interesting 'anima' cuirass in this relief from Krasna Horka https://upload.wikimedia.org/wikipedia/commons/0/08/Kr%C3%A1sna_H%C3%B4rka_133.JPG