The good times of summer

Salvete omnes,
my friend Krzysztof Laszkiewicz, local historian and 'collectionner' of unusual antiques, while doing research encountered and thus re-discovered the original AD 1433 Lodz town charter granted by king Wladyslaw II Jagello. Town and its belonging villages were owned by Crown chancellor Piotr Szafraniec, Bishop of Wloclawek, Stary Kon coat of arms.
This was the second charter granted to Lodz, 10 years before the king  granted first charter.
Nota bene my own hometown, 30 km away to the east,  was located in the allied duchy of Masovia, and its town charter was granted by the Masovian sovereign prince Siemowit V of Masowia in AD 1427.

The Lodz renewed charter our ailing king granted during the important war council and gathering of magnates, nobles and Crown troops in the Royal Castle of Kolo. with witness being some of the most important persons of the Polish Crown:
-Wojciech Jastrzebiec, Archbishop and Primate of Poland, Jastrzebiec coat of arms
-Zbigniew Olesnicki, bishop of Krakow, Debno coat of arms
-Spytek of Tarnow, voivode of Sandomierz - Leliwa coat of arms
Jarand (Jurand) of Grabie, voivode of Sieradz - Pomian coat of arms
-Marcin of Kalinowa, veeran  commander of the battle of Grunwald and at the time of signing of the Lodz charter the commanding officer of the Polish troops on the Polish Crown-Teutonic Order border. - Zaremba coat of arms
-Mikolaj of Michalow, Castellan of Krakow, Roza coat of arms

The document was most likely read aloud and sealed by Wladyslaw of Oporow, Crown sub-chancellor and king's confidante and adviser. Wladyslaw was of the same coat of arms as famous Zawisza Niger (Czarny aka Black), i.e., Sulima coat of arms.
This document was lost since 1922 and Krzysztof brought it back into the public light and enjoyment in March of 2018. Now his book - How I rediscovered Lodz Town Charter - is ready and will be available for purchase  in Poland starting July 27, 2018. 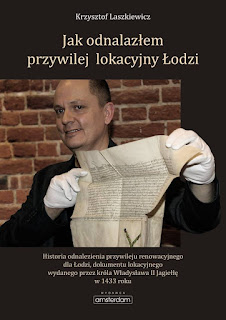 I did 4 small drawings for my friend's book and I pray the will smartly augment his narrative.
here there are some sketches I did in preparation for the book 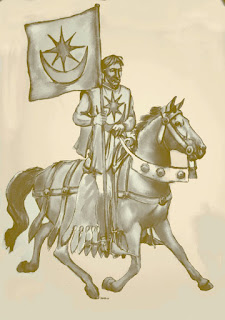