Salvete Omnes,
Wiki Commons has given us access to one unusual XVII century print showing two stages of the winter [January] battle of Walmojza (Wallhof), AD 1626, where Swedish king Gustavus II Adolphus defeated a small Polish-Lithuanian army under starost of Slonim and grand Lithuanian marchall Jan Stanislaw Sapieha, son of Lithuanian grand hetman Lew Sapieha, Lis coat of arms.
Polish-Lithuanian army was divided into two division, starost of Slonim was commanding perhaps a smaller detachment of the Lithuanian army, while the larger one was commanded by the talented hetman Krzysztof Radziwill, Traby coat of arms, who was some 35 km away from the battlefield and in fact was one of the most interesting commanders and tacticians in the Polish-Lithuanian military history.

Walmojza was the first significant Swedish field victory over the Polish-Lithuanian army, including the winged hussars, during the Polish-Swedish wars for the control of the Baltic provinces and shores.

The map, with all its appearances, looks as it was done shortly after the victory and perhaps represents a piece of Swedish propaganda.
However, even if so  it contains lots of interesting and useful information about the battle, troops involved and even the terrain. or small events taking place during this engagement.
I will attempt to list Polish companies and banners participating in this battle
starting from the top of the first of two prints showing the battle of Walmojza:
right to left of the Polish-Lithuanian army , in parenthesis probable historic names of known commanders :
2 Old kozak-pancerni banners - [commanders' names]
-Woginski?
-Zemetowa? [Konstanty Zienowicz] 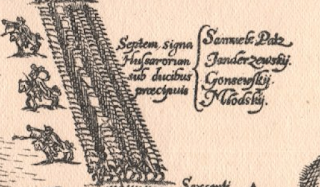 artillery - 5 guns with 6 German musketeer infantry 'units'?* standing behind them 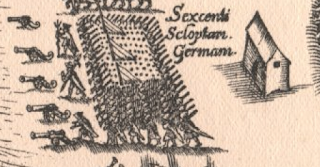 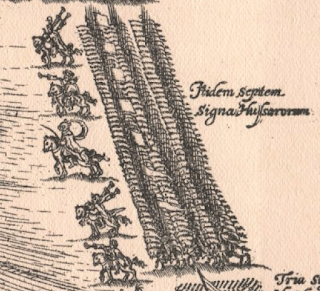 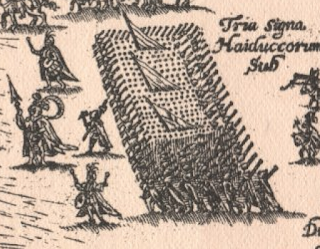 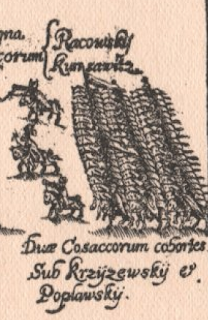 so according to the Swedis.h source for this print Polish-Lithuanian army at Walmojza consisted in total of :
20 banners of cavalry - 14 of winged hussars or heavy cavalry,  4 old kozak/pancerni medium cavalry and 2 reitar (pistoleers)
9 units of infantry - 6 'units' of German musketeers*, and 3 companies of Polish infantry.
5 field artillery pieces
a quick commentary:
from reading Henryk Wisner's article on the very war -  Wojna Inflancka 1625-1629 (Livonian War 1625-29)[1] pp.48058-we can see that the Polish-Lithuanian army at this theater of operations had nowhere near the 14 banners of winged hussars, be it under the command of starost of Slonim or hetman Radziwill -  so this print is quite a bit too optimistic in the portrayal of the Polish-Lithuanian army and represents either  the wrong intelligence the Swedish army command had about their Polish-Lithuanian enemy or it was a willful attempt to make Swedish victory greater, - of the sort : we did defeat the undefeated Polish winged hussars, u la la ! -  than it was in fact.


*Michal Kadrinazi wrote some info about of the Duchy of Lithuania infantry during this period.
ps'
Walmojza battlefield as it appeared  in 2009