Happy Forth of July

Salvete Omnes,
today there is the anniversary of several important battles and the American national holiday.
well,
on July 4th 1187 the Kingdom of Jerusalem and its vassals lost the most important battle since the First Crusade - Hattin. Cunning,talented and most ruthless Kurdish  sultan Saladin won his most stunning victory, that gave him an immortal fame.
on July 4, 1610 Polish hetman Zolkiewski with his tiny army of mostly winged hussars defeated the huge army of the Muscovite tsardom under Shuisky-de la Gardie, took Moscow in a short stride, Poles occupied Kremlin and thus opened the way for a Polish ruler on the 'Rurik's' throne. It is entirely other matter that the scheme did not work out to the Polish advantage.

Happy Forth of July to all my Americans all over the world !
and the detail from the XV century (?) fresco from a Church in Norwich, UK. Saint George and the dragon.
I do not have a better image - images from Wiki Commons. 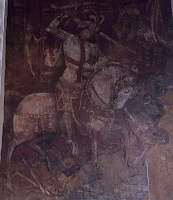