Salvete Omnes,
I watched the entire second half of the soccer match between Croatia and United Kingdom teams during Mundial in Russia. it was a great game - Vivat Hrvatsko!

ad rem, after the Partions of Poland the fate of the Polish Royal Insignia (one day I should list some of them via various inventories done prior to AD 1795) was not different from other Crown property taken by the partitioning powers - Russian Empire , Prussia and Austrian Holy Empire. Those Polish Royal insignia taken by Prussia were destroyed by the Prussian king's orders (on their way to unify Germany and become emperors) who had them melted and minted into money.  Royal Insignia taken by the Russian Empire survived the Partitions.
our king Kazimierz Wielki (the Great) was buried with his royal insignia - crown, apple, scepter, gold ring with an amethyst, and a pair of stirrups - in the Krakow Cathedral in 1370.


In AD 1869 when Kazimierz's sarcophagus was opened and contents studies by scientists and artists were busy sketching, the royal insignia discovered inside the casket were copied and the originals can be found on display at the Cathedral Treasury (John Paul II Cathedral Museum) situated within the Wawel Hill Royal Castle complex in Krakow.
A copy of Kazimierz's Royal Insignia can be also viewed at the Beginnings of the Polish State Museum in Gniezno, the ancient capital of Poland.
Several views of the Royal Insignia display as can be seen at Gniezno Museum. 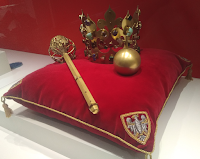 one of the Royal spurs

There is also another crown thought to had been owned by Kazmierz the Great, a helmet or traveling crown - it was found in Sandomierz and it is one of few surviving helmet crowns  in Europe.
Valete!
Posted by Dario T. W. at Wednesday, July 11, 2018

Helena Schader - article on the origin of the House of Ibelin, one of the premiere Cusader families in the Outremer lands https://schradershistoricalfiction.blogspot.com/

better, more precise link to the above article - https://schradershistoricalfiction.blogspot.com/2018/07/the-house-of-ibelin-obscure-origins.html