Birth of the Polish-Lithuanian Commonwealth AD 1569

Salvete omnes,
on this summer day of AD 1569 the Polish-Lithuanian Commonwealth was born.

Jagiellonian monarch Sigismund Augustus, the King of the Crown of the Kingdom of Poland and Grand Duke of the Grand Duchy of Lithuanian, and his subjects - representatives of the Crown of Kingdom of Poland and of Duchy of Lithuania - came to sign the real union between two states during the Sejm Walny (three-tiered - king, senators and representatives -  parliament) gathered in Lublin. His Royal Majesty ratified the union on July 4 [sic!] Ad 1569. 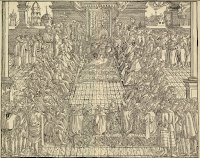 The childless king ruled over a realm that had been already in personal union under himself and prior elected rulers of the Jagiellonian Dynasty since AD 1385. The act changed the two-state uneasy personal union into one-state union, preserving some not too small differences. In 1791 the Parliament abolished the Union retaining a single state. 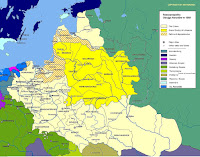 The document was singed in the royal city of Lublin, now in eastern Republic of Poland, back then it was the center of the vast state.

... perhaps for the first time the name 'Rzeczpospolita Obojga Narodow' (Commonwealth or Republic of Two Nations)) was used in an official document where it is inserted in there under  the promise of using their lances to defend the more violent needs of this new Republic.

Modern Republic of Poland still officially calls herself Rzeczpospolita (with Polska or Polish added) in all official and unofficial documents,  448 years after this christening.

The coat of arms of the new union was eventually a white (silver) eagle (White Eagle) and a white (silver) charging knight on a white horse ( known as Pogon/Pahonia) in a escutcheon parted quarterly, the color of the shield was gules or red. 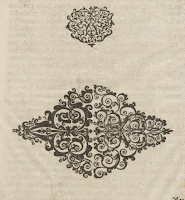 enjoy
ps
images are from the Statuta y Przywileie Koronne published in 1570, from Marcin Bielski Kronika circa 1594, and also Wikimedia Commons.