Stubbs - The Anatomy of the Horse

whenever I can I study the horse -  conformation, anatomy, physiology, behavior etc, just name it. I can say I am lucky to have horses around. But with our technology and 'gadgetry' we can have a horse image & film or a book/article right there on our device, without having to go to a stable or pasture or slaughterhouse and definitely without smelling its certain smells.

More than 260 years ago one English artists did not mind the smells at all and he spent countless hours and years drawing horse carcases in order to learn equine anatomy.
Hence I would like to turn your attention to a set of splendid engravings that offer the first anatomically correct and esthetically fabulous study of horse anatomy. These anatomy engravings and drawings were executed singlehandedly  by the English artist named George Stubbs, already  a maestro of the equine art, and in these  plates even today one can find help and guidance, and beauty.

In order to carry his task of doing the study of horse anatomy Stubbs rented a farmhouse in Horkstow in Licolnshire, as Venetia Morrison, author of The Art of George Stubbs, explains in here work (pages 21-45) - he would spent there 16 months of hard work, with 'carcasses in more than purified state.' would complete them around 1758, and additional 8 years to complete the plates as etchings etc and have the work published as The Anatomy of the Horse (1766).
I will quote directly the method as described by Ozias Humphrey, author of the Memoir written circa 1795 (the Picton Collection, Liverpool City Library), cited by Ms Morrison:
'The first subject wch[which] was procured was a horse wch was bled to death by the jugular vein - after wch the Arteries and veins were injected[with warm wax says Ms Morrison]. Then a bar of iron was suspended from the ceiling of the room, by a teagle [hook] of iron to wch iron hooks were fix'd - under this bar a plank was swung abt[about] 18 inches wide for the horses feet to rest upon - & the Horse was suspended to the bar  of iron by the hooks above mentioned which were fastened  into the opposite side of the Horse to that intended to be design'd, by passing the hooks to though the ribs & fastening them under the Back Bone - and by these means the Horse was fix'd in the attitude wch these prints represent and continued hanging in the posture six or seven weeks, or as long as they were fit for use - His drawings of a skeleton were previously made - and then the operations upon this fix'd subject were thus begun. He first began by dissecting & designing the muscle of the Abdomen - proceeding through five different lays of muscles until he came to peritoneum and the plura though wch appear'd the lungs & the intestines - after wch the Bowels were taken out & Cast away. - Then he proceeded to dissect the Head[..] and so he proceeded till he came to the Skeleton - it must be noted that by means of the Injection  the Muscles. the Blood vessels, and the Nerves, retain'd  their form to the last without undergoing any Change of position.
In this manner he  advance  his work by stripping off Skin and clearing  and preparing as much of the subject as he concluded  wou'd employ a whole day to prepare, design and describe, as above related till the whole subject was completed' 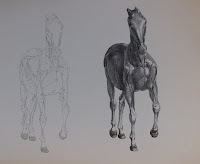 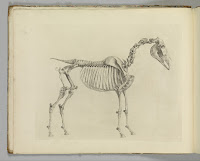 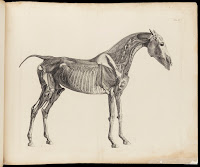 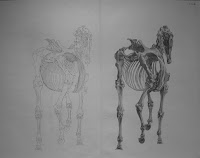 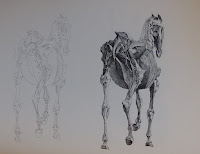