Salve,
some 357 years ago Godfryd von Schroer, Gdansk patrician and Polish Crown representative for the cultural booty Swedish armies stole and robbed  from the Polish-Lithuanian Commonwealth prior to the Treaty of Oliwa 1660, went to Sweden to recover these thousands of books, maps and manuscripts pursuant to the Articles VII & IX of the treaty, but generally and miserably he failed in his mission, and did not  recover any significant amount of said loot, and the treasures (many thousands of manuscripts and books included there)gave raise  the amazing collections in the Swedish museums and the National Library. However, the case is still open, as there is no statute of limitation here.

One of those many treasures was the Rolka Sztokholmska (Stockholm Roll or as known in Sweden Polska Rullen ) or a long gauche painting depicting His Royal Majesty Sigismund III entry into Krakow in 1605.

The painting is unusual in its size, theme and amount of information, and beautiful in rich detail depicting this royal entry. It has been used in many books, articles and reconstructions etc.

Nota bene, a German painter Baltazar Gebhard is thought to have been the author of the Rolka. 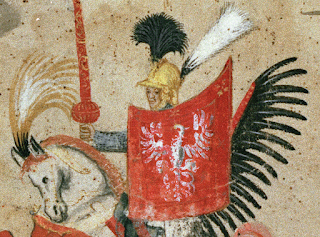 Today is the Flag Day in the Polish Republic (Rzeczpospolita Polska) - vivat!
Our king's heraldic outfit from the XV century armorial 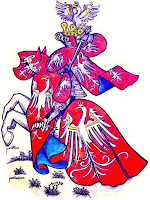 and if you have not read, do read it Hollywood’s War With Poland, 1939-1945 by M. B. B. Biskupski the review of http://cosmopolitanreview.com/hollywoods-war-with-poland/