Salvete omnes,
in 1682 Habsburg officer and gentleman Luigi Ferdinando Marsigli was taken prisoner during the war with the Ottoman Turks that his employers, Holy Roman Empire, fought against.He spent several years in captivity and being a military man he observed the Ottomans with care and consideration.
Eventually he wrote and illustrated a book aptly titled L'État militaire de l'empire ottoman or Stato militare dell'Imperio Ottomanno  that was published in Amsterdam in 1732.

Let me share with you the following details of his plate on the Turkish cavalry campsite, where horse are kept separated by boards from their food, while they are picketed by their hind leg 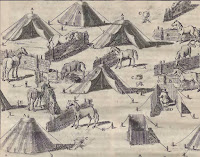 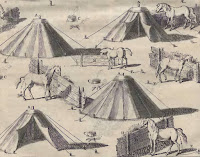 also horse tack and aids according to Marsigli

enjoy
ps
there is one more interesting plate, showing the Tatars crossing a river but we will save it for another day
ps'
I have just read that Zbigniew Wodecki, a famous singer-musician from Poland -my favorite of all times is his theme song to Pszczółka Maja , passed away today - pacem aeternam, panie Zbigniewie!
Posted by Dario T. W. at Monday, May 22, 2017

Michal Kadrinazi found some photos of the colored pen-and-ink tent drawings from the original manuscript - they come from a more than 350 pages long manuscript held in Sweden.

Tragedy in Manchester UK 22 killed and 119 wounded - ISIS on the attack in Europe - it is war, but the tolerant and open-minded European elites refuse to acknowledge as such, and cannot stepp up to defend their own citizens...
http://www.dailymail.co.uk/home/index.html