Salve,
the Polish military celebration of the 1050 anniversary of the Polish state is fast approaching - August 15, 2016. There will be marches and parades, including a mounted parade in front of the Poland's President in Warsaw.

In the capital of Polish Republic there is this busy intersection called the Rondo Jazdy Polskiej ('Polish Cavalry Roundabout'), and to the side of this roundabout just where Mokotów Field park beings there stands the 'Pomnik Tysiąclecia Jazdy Polskiej' ( 'Millennium Polish Cavalry Monument' ). 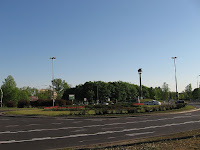 The monument arose due to the popular demand, it was founded by the money collected from the donations, and it was designed by Mieczysław Naruszewicz, sculptor and industrial designer, and so it stnad today in its unfortunately it is not the best example of how to display a monumental sculpture of this caliber - basically the monument is facing the park and not the traffic (viewers) at this quite busy Warsaw intersection. Some say the cavalry is charging south, towards our Czech brothers.

For the ideological reasons, built during the Communist Jaruzelski Junta reign,  the monument does not include any figure of the winged hussar, or a knight or any reference to the noble traditions of the Polish cavalry. Instead it consist of two figures - a mythical mounted druzhina warrior and a Communist cavalry horseman. 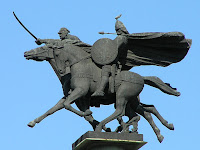 The plates on the column list some of the battles Polish cavalry participated in, from Ad972 to AD1945, but the list does not linclude the last charge by the Polish cavalrymen, this one being an action in 1947, when the 'WOP Konna Grupa Manewrowa' (Mounted Maneuver Group') charged the UPA sotnia at the foot of the Chryszczata Mountain in the Bieszczady Mountains. 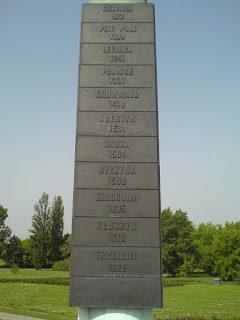 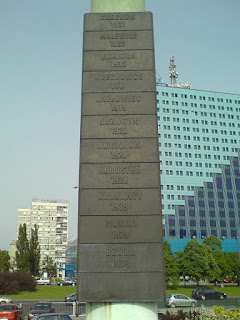 enjoy
ps
The Wołyń (Volhynia ) Genocide - traditionally commemorated by the Poles around the world on July 11 or the Bloody Sunday - was remembered last week, I am eagerly expecting the very first feature film, Wołyń,  by Wojtek Smarzowski hopefully coming out this Fall to the theater near you.
Perhaps should tell you a story - when I lived in Brooklyn, my landlady, then an elderly woman but full of life and 'joke,' was a Pole from Volhynia who luckily survived the genocide, but losing her parents and a sibling and many other relatives during these horror times. First, her father had been killed by the Germans and their Ukrainian helpers (she was not sure who did it, he had been first interrogated and tortured by the German police but was allegedly released to go home to have been found murdered when his way),  then a year later in 1943 being a little girl she saw her very mother and her little brother murdered by the Ukrainian neighbors. Her brother and she hid in the attic of their home, where another Ukrainian neighbor found them there but mercifully allowed them to run away to their family (auntie) in the distant village (she was 8 and her brother  was not yet 10 years old).
Their home and the farm buildings and their lands were taken by the Ukrainian state and neighbors, so they, being refugees from their village and Poland being occupied by the Soviet Army and Volhynia lost to the Soviets, were never compensated for their property (eventually the brother and she  found home and started their own new families in the US).
[all photos are from Wikimedia Commons)
Posted by Dario T. W. at Monday, July 18, 2016