Salve,
let us move deeper into the European history today, and thus I would like to invite you for a little excursion into the world of the Italian master Titian or Tiziano Vecellio...
Should I add that I absolutely admire and enjoy Titian's works (eg 1, 2,3, 4, 5... ), especially his religious and mythological works, his nudes and portraits. Perhaps I should - :)
I own one large album of his works by Sir Claude Philips, but then Wikimedia Commons users and Google Art project allow us, by providing high resolution photos, to get so close to many of the paintings that we can almost touch the brushwork , or so it seems.

So, while looking a this large painting by Titian - Ecce Homo - (the painting is quite dark in the area of horses, perhaps due to the aging process and various restoration/protection efforts) I noticed several interesting aspects of the contemporary riding equipment, costumes and finally quite naturalistic horse portraits.

First horse and rider - going left to right - is a Saracen (Ottoman Turk in costume and appearance) thus his horse also might be Turkish - nota bene it is a palomino. The bridle appears to be influenced by the Turkish design, but the curb-bit has some long 'S' shaped shanks. 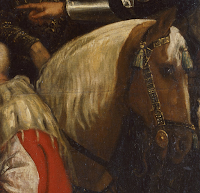 a closeup on the bridle - the low noseband is very interesting.

but then this net-like covering with tassels is similar to the French XVI century equestrian tack, often designed by the Italian artists. Perhaps it was copied from the Ottomans? 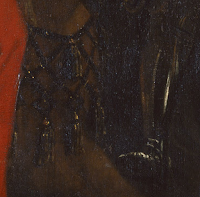 a closeup - large, expressive eyes and neighing mouth (another very animated horse in this Titian's painting)

actually the horse is not dissimilar to the horse face in the famous Breda painting by Diego Velazquez - perhaps an Iberian horse then? 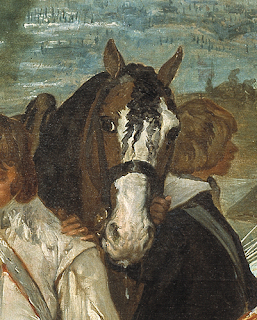 this horse and the Velazquez horse have stockings - coincidence, or preference for colorful horse markings... 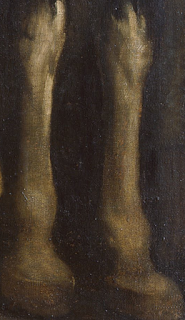 the soldier in a foreground wears an interesting short crimson velvet? coat with long kontusz-like sleeves (going back to the Median/Persian riding coat kantuš), while the figure behind him has a long expensive chain-of-mail coat on the second figure. Both are wearing swords, with two different kinds of suspension. 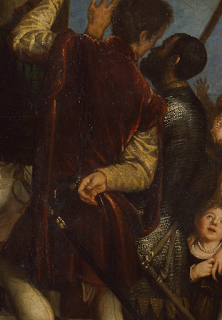 Nota bene in this painting this costume was used as well, except over the armor

staff weapons - a halberd and a partisan, also a flag