Salve,
today let us go back to Europe, and to the lands of the winged hussars.
some years ago I wrote about this painting - showing Polish tsarina Maryna Mniszech going to her coronation  in Moscow. I wrote that that it had been lost.
Well, it has not been lost, but rather the Russian took it ... far away, to Russia, and presently it is kept at the Moscow State Historical Museum.

The canvass was painted (perhaps by Szymon Boguszowicz from Lwow), for the Mniszech family castle at Laszki Murowane during the first half of the XVII century, and then was taken to the Wiśniowiec Palace, the XVIII century opulent  magnate residence of the Wisniowiecki and Mniszech families (destroyed mostly during the Polish-Soviet War of 1920, and some more during the 1939-45 period of the Soviet and German destruction of the cultured Central Europe). 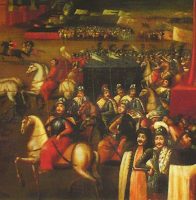 a fragment of the above Maryna's coronation painting, showing  splendid garments of the Polish nobility and her own coronation costume 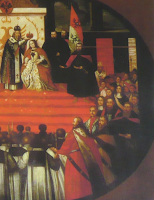 and finally her husband, tsar Dimitri , in a very royal stance typical of the period,  appearing very martial wearing a  set of armor not dissimilar from those worn by the wealthy winged hussar comrades. 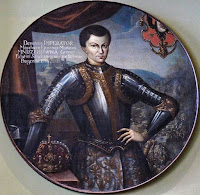 enjoy
ps if you are in Moscow, Russia, try to see if they display these fine and very  Polish XVII century paintings.
Posted by Dario T. W. at Sunday, July 31, 2016