Salvete omnes,
today we will ride to the country of the Great Plains horse people, where winds will never stop blowing.
in the past I pointed to the so called ledger drawings as the best source for the Plains Indians history, imagery and fine example of graphic storytelling done by the horse warriors themselves. My favorite Great Plains tribe, the Cheyennes,  had some very fine artists skilled in telling the stories of their exploits.

I would like to point your horse - :) - towards this still great book - ''The Fighting Cheyennes'' by George Bird Grinnell.

First published in 1915, after many years of work with the Cheyenne through George Bent (I would like to point you to his fine biography by his contemporary and fine Plains people historian George E. Hyde,  titled  'Life of George Bent: Written from his Letters' (1967)  or this one, that is not very trustworthy - David Fridtjof Halaas, and Andrew E. Masich,  'Halfbreed: The Remarkable True Story Of George Bent.')
Bellow find  three  reviews written and published in respectable research journals already in 1915-16,

this one by Ralph Linton: (The Mississippi Valley Historical Review, Vol. 3, No. 3 (Dec., 1916) ).
''[417-18]
No student of American history can fail to have been struck with the partisanship of the sources available for the study of the Indian wars of the United States. The Indian histories of the past century were usually written with feeling, and therefore interest, ran high ; while their authors, if they had not been actively engaged in fighting the subjects of their books, were usually densely ignorant of Indian life and psychology. In all cases they looked upon the Indians as enemies whose victories had to be accounted for in some way which would save the reputation of the whites, while their defeats must be correspondingly magnified. It is refreshing therefore, to encounter such a work as The fighting Cheyennes which, in setting forth the wars of that tribe, draws its material from both white and Indian sources, and which, while scarcely impartial, does not attempt to suppress any of the facts. The author numbers among his friends many army officers who took part in the later Cheyenne wars, while his long association with that tribe has enabled him to gather information at first hand from old men who participated in their stubborn resistance. The book is thus in large part compiled from the narratives of eye witnesses; while in the frequent cases where the white and Indian accounts disagree, or where the partisans of either side disagree among themselves, the conflicting narratives are given and
the reader is allowed to make his own choice. In conflicts of the former sort, the author 's decision is uniformly in favor of the Indians, for whom his book is avowedly a plea; but his partisanship does not detract from the value of the work, and is perhaps needed to counterbalance that of the earlier white authors. Indeed, it would be hard to read the details of the various massacres and outrages perpetrated by the white troops, as gleaned from their own official reports, without becoming a partisan and acquiescing to the decision of the committee of 1865 that, "In a large majority of cases, Indian wars are to be traced to the aggression of lawless white men." (Committee appointed by resolution of Congress, March 3, 1865. Report, of 1867.)

In the various Indian accounts of raids and battles, the book offers the specialist in the history of the Indians of the plains a wealth of material not hitherto available, while its correlation of the white accounts now extant would also prove useful ; but from an ethnological point of view it leaves much to be desired. There is no attempt to describe concretely the culture of the tribe, nor to explain its organization and religious concepts, factors which played a very important part in determining the actions of the group, as well as those of the individual. At the same time there are many references, to the various soldier societies for in- stance, which would be unintelligible to any one who had not some slight knowledge of the social organization of tribes of the plains. The book contains many concrete instances of the working of various beliefs and institutions, but these are unintelligible to the historian or layman, to whom they appear as strange customs without context or background ; at
the same time these accounts lack the accuracy and detail necessary to make them of value in comparitive* ethnological study. Viewed from this direction, the book appears as another of those hybrids, neither scientific or truly popular, upon which so much time and energy have been wasted. To the person whose interests are neither ethnological or historical, the book should appeal as an excellent account of frontier adventure, seen from a new angle. It contains plenty of brave deeds and hair-breadth escapes, the actuality of which makes them doubly interesting.''

''[612-614]
Of some twenty wild tribes formerly ranging the great Plains from Canada to the Mexican border, one of the most important, owing chiefly to their central position adjoining the overland trails, was that of the Cheyenne, or as they call themselves Dzitsistas, nearly equivalent to "kinsmen". Formerly of eastern Minnesota, they drifted across the Missouri; and for eighty years past have lived in two divisions, widely separated but keeping up a friendly intercourse, viz., the northern, ranging chiefly along the North Platte in company with the Sioux and Northern Arapaho, and now gathered upon a reservation in Montana, and the southern, much the larger division, ranging south from the Arkansas, in company with the Kiowa, Comanche, and Southern Arapaho, and now residing with them in western Oklahoma. The whole tribe at its best may have numbered 3500 souls or perhaps 800 warriors. The latest census gives 1420 for the northern and i860 for the southern division.

The author of this latest contribution to tribal history has a long and intimate acquaintance with the Northern Cheyenne, but his knowledge of the Southern and more important' division is comparatively limited, and the difference is at once apparent as soon as he leads his readers south of the Arkansas. The bias of the work is indicated in its title. From frequent listening to their own narratives of old-time warlike deeds the visitor may unconsciously imbibe their own idea of
their superior valor, but while the Cheyenne are truculent and hot-headed, and correspondingly hard to deal with, there is nothing in their history to show that they were better fighters than their neighbors. In 1837, matched against Indians, they were completely routed by the Kiowa, a smaller tribe, with the loss of every man of their best warrior company, 48 in all. In 1868, on Arikaree Fork in Colorado, Colonel Forsyth with 53 plainsmen, fighting on foot in the open, successfully held off some 500 picked and mounted warriors for eight days, inflicting considerable loss, until relieved. The Cheyenne speak of this engagement as a fairly even encounter. In the outbreak of 1874-1875 the Comanche took the initiative and were the last to surrender. In the Fort Kearney and Custer massacres the Sioux were the principals and the Indians outnumbered the soldiers fifteen to one.

The principal events in Cheyenne history for the last hundred years are sketched in interesting fashion, chiefly from Indian reminiscence, with occasional reference to other sources of information. All of these events are a part of the general history of the plains and have been repeatedly written up by Bourke, Mooney, Robinson, and others, as well as in published official reports. We get few new facts, but we get the Indian viewpoint and incidentally much valuable light upon Indian belief and custom. The story is simply told, with none of the exaggerated statement and impossible happenings common to Indian " bestsellers". Of all these, probably the Forsyth fight has been most sensationalized, although the plain fact of 50 men against 500 would seem to be sufficiently heroic. The Chivington massacre byColorado volunteers comes in again for deserved condemnation, and the Fort Robinson
tragedy closes the story of resistance to inevitable fate.

In many places, particularly in the chapters dealing with events in the south, there is a looseness and vagueness of statement inseparable from a work based largely on the recollections of illiterate informants, but which could easily have been corrected from official and other published sources. Thus the Lone Wolf of 1837 is confused with his grandson of the outbreak of 1874, and it is stated that he died "not long ago ", the actual date being 1879. It is stated that " a Comanche " brought the pipe, i. e., the invitation for a general rising, to the Cheyenne, the author being apparently not aware that this was Quana* Parker, half-breed chief of the Comanche, and the ablest and most famous character in the history of the confederated tribes. He commanded in person at Adobe Walls, where, as he stated to the reviewer, he led 700 warriors, but — with a smile — " no use Indians fight adobe ".
In his account of the disposition of the Cheyenne prisoners after the surrender the author says that " about 25 " were selected and sent to Florida, " where they were held five years ". The official statement is 33, and they were held exactly three years. Of the DullKnife flight from Fort Reno he says, " of the 300 Indians 60 or 70 were fighting men ". The official Record of Engagements says 335 Indians, including 89 men.

The most notable instance of this defect is in the account of the great Medicine Lodgetreaty of 1867, by which the southern tribes were assigned their final reservations. Speaking of the slowness of the Cheyenne, he adds, " apparently the Cheyennes did come in and sign, though definite information as to this is lacking ". The Cheyenne, as one of the principal tribes concerned, certainly did come in and affix their signatures, and their coming, as described to the present reviewer by Senator Henderson, one of the commission, and Major Stouch, in charge of the escort of Seventh Infantry (not Seventh Cavalry) troops, was the dramatic event of the gathering. They came on full charge, several hundred naked painted warriors, yelling and firing their guns as they rode, every man with a belt of cartridges around his waist and a smaller bunch fastened at his wrist. " I confess ", said the senator, " I thought we were in peril ".
As a compendium of Indian reminiscence from the Indian stand-point, obtained directly from the actors concerned, the work has a peculiar interest, and it is of value for the sidelight it throws upon tribal belief and custom. As history it is lacking in exactness.' 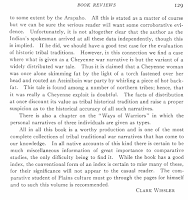 this journal is libre - https://archive.org/search.php?query=creator%3A%22Wyoming+State+Historical+Society%22